Let the trenching begin!  I've been trying for two years now to get sprinklers installed in our yard.  I could write several thousand words just describing all the various things that have gone wrong on the three separate attempts I've made.  But today is a red-letter day on this project, because today the first trenching on the project occurred.

If I were to stop right there, you'd think that great things were likely happening.  But about 30 seconds after I snapped the last photo below, an alarm started sounding on the skid-steer – the engine coolant was approaching a critical high temperature.  Oh, noz!  A little quick detective work on Mark T.'s part showed that there was a coolant leak, and that the coolant level was low.  Mark tells me that today's work is the first time any of this gear has been used since last fall, and he's had coolant leaks develop over the winter before.  So now he's off to get some more coolant, and to gather his tools to find and fix the leak.  Sigh.

Ignoring that little problem, though, his trenching machine is a pretty cool little gadget.  It's powered hydraulically, through the enormous hydraulic pump on the skid-steer: 24 GPM vs. the 5.5 GPM on my tractor, despite the nearly identical horsepower rating of the machines.  The teeth on the trencher drag soil to the surface, where an auger scoots it out of the way to the left of the driver.  It makes a very neat trench about 6" wide, and it does so quite quickly compared with a backhoe.  On the other hand, it can only do skinny little trenches – if you need one any wider than 6", you're out of luck... 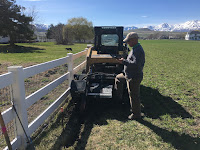 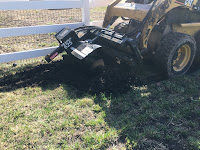 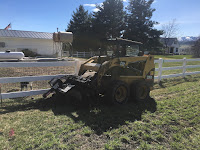 Posted by Unknown at (permalink) 3:41 PM