Things that slightly loony people wonder about...  I play a lot of Scrabble, both against other people and against the computer.  On an average day, I probably play ten or so games.  I often find myself in situations where I'd like to make a word – usually a fairly short word – but none of my letters will make a word I know.  So I'll just try random letters, checking against the game's dictionary, to see if any combinations will work.  Occasionally they do, but far less often than I expect. :)

So I got to wondering: just what fraction of the possible combinations of letters actually form English words?  I know it's a small fraction, but just how small is it?  I found a source that listed the number of English words of various lengths (the first two columns below), then whipped up a little spreadsheet to do the math: 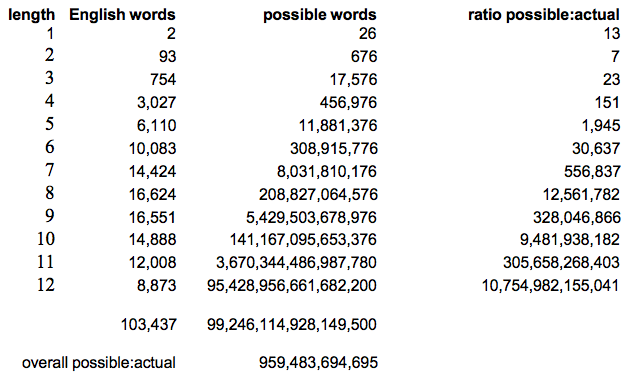 The “possible words” column is just 26 (the number of English characters) to the power of the word length.  That's the number of possible combinations of the twenty-six letters of the alphabet.  This is actually a bit overstated, as in Scrabble you can't possibly have a three letter word that's all Qs, as the game only has one Q.  Correcting for this was more work than I was willing to put into this exercise. :)  The ratio possible:actual is simply the third column divided by the second.  It shows you (for example) that for four letter words, just 1 combination out of 151 possible is actually a word.  Sounds like terrible odds, doesn't it?  But then look at longer words, and the odds get far, far worse.  By the time you get to eight character words, you've got just one chance in 12 million.  And twelve character words (where I stopped), just one chance in 10 trillion.  Yikes!  This tells me that for words longer than four or five characters, random attempts are just about into crazy territory...
Posted by Unknown at (permalink) 6:50 AM