Paradise ponders, all trussed up edition...

Paradise ponders, all trussed up edition...  Man, I was busy yesterday!  Since it was the last forecast day of nice weather for a while (and most likely, the last until spring), I spent the day getting ready for winter.  That meant:
For some unknown reason I was kinda tired after doing all that!

Later in the evening, Debbie and I took Cabo for her second puppy class.  She did quite well in class, including being better-behaved around the other dogs (instead of barking all the time, she mostly just whimpered a bit).  I think she just can't stand it when it isn't all about her! :)

There was some progress about the homestead, too.  The tile guys showed up and finished laying the tile in the mud room – beautiful, it is.  We are just amazed at how good these modern “wood-look” tiles look. It's modern technology at work: they start with a photo of an actual piece of wood, then use an ink-jet printer to reproduce that photo in glazes which are then vitrified into the porcelain surface.  These are rapidly improving; in just a couple of years they've gone from two-color printing to four-color printing, greatly improving the result.  Another improvement is the incorporation of some wood grain texture into the surface (even when it doesn't match the printing, it still adds realism – our perception is tricked into thinking it's actually wood).  The tile guys will be back on Friday (after the tiles they were short on come in) to finish the sun room tile, grout the mud room, and repair the kitchen tiles where the door installers broke some.  Then they'll be back on Monday to finish up the grouting in the sun room and kitchen, and they'll be done. 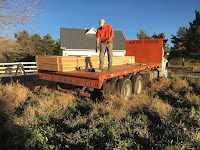 Our construction crew showed up for part of the day, and they finished putting down the redwood deck and fascia.  They used a lot of screws!  Each deck plank crosses about 20 joists, and there are two screws in each of them.  I didn't count the planks, but there are about 50 of them.  That makes around 2,000 screws!  While they were working, a truck drove up from the lumber company with the trusses for the roof over the deck (at right).  These were already several weeks late, and we didn't know when they'd get here.  This is very good news; it means the builders now have nothing to stop them from finishing that roof!

The painters showed up to evaluate our job and estimate it.  We ended up agreeing to do a time-and-materials job, as it would probably be almost as much work to estimate as to actually do it. :)  That's because we have a bunch of little things to do, and nothing big.  We were very pleasantly surprised to find out that (a) they could come today to put a coat of preservative on our redwood deck, and (b) they can start on the rest of it next week.  Woo hoo!

Finally, the guy we ordered our doors through showed up to take care of all the little problems we found with the doors.  Three of the four doors had issues, and only one of them was something I could fix.  The rest had assembly issues or missing hardware or missing screens.  This fellow made a good list of all the issues, and promised that he'd have them all fixed within a few days.  That would sure be nice!
Posted by Unknown at (permalink) 6:42 AM