Paradise ponders, supermoon edition...  On Sunday evening and Monday morning, we had mostly cloud cover, so we didn't get to experience the supermoon first-hand.  Last night and this morning, though, was a completely different story.  Our skies were clear, and the supermoon still appeared to be completely full.  This morning was especially clear, and when I walked the dogs around 5 am the brightness was startling.  I could easily see colors: the red, white, and blue of our American flag stood out, as did the yellow of our Gadsden flag.  Even at a distance, our blue spruce were, well, blue.  The dogs didn't care, though – their little sniffers were plastered to the ground, following all the deer tracks with great excitement. :)

Our tile guys took three steps forward yesterday, but two backward.  As you can see in the photos, they did get quite a bit of tile put down.  The first step backward was a materials problem: they ran out of the blocks of four small squares that are the centers of the pinwheel pattern in the sun room.  They're on order, but won't be in until Friday.  The second step backward was a mistake in the mud room.  It doesn't show in any of the photos, but one entire row of the herringbone pattern was oriented 90° off.  Adrian (the boss of the crew) noticed it was he was helping Jose (the fellow who laid most of the mud room tile) with some cuts.  They called me over to see if I'd accept it the way it was, and I said “no”.  Jose was very embarrassed. :)  Adrian agreed with me that it should be redone, and they spent about an hour peeling up the incorrectly laid tiles (thankfully the mastic had not yet cured!).  Adrian is the cheerful fellow in the last photo, and he looked like that most of the time – that smile is nearly permanently plastered to his face.  Jose is the guy in the next-to-last photo. 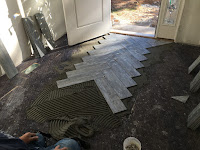 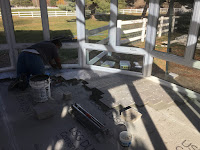 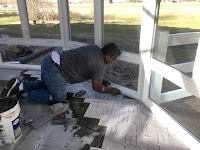 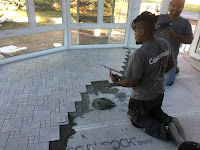 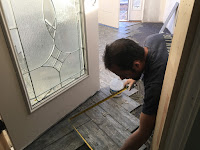 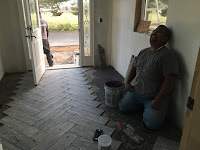 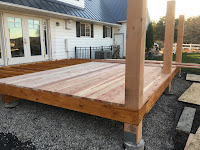 Our construction guys showed up late in the afternoon, and stayed for just a couple hours.  They got more redwood laid down, but not nearly the progress we were expecting.  All my attempts to communicate with Jim J. (the boss) failed; I'm guessing that he was in dental surgery yesterday.

Our fencing guys showed up for a couple hours and made some more progress.  It looks to me like they've got two or three more afternoons of work to do, maybe even more – and the weather (see below) will likely stretch that out for a while.

I spent yesterday working indoors, on some finishing work inside our house.  I caulked the interior side of our new kitchen door (leading onto the hypothetical deck), and then masked about half the inside glass off for painting.  That was all quite tedious work.  More fun was what I did in our bedroom.  When the new door was installed in there, there was a gap left between the wood flooring of the bedroom and the aluminum threshold of the door.  Unfortunately this gap was irregularly shaped, about 48" long but varying in width from 1/2" to 1".  Worse, the depth of the gap was weird: about 9/16".   I had a piece of walnut in my shop big enough to fill the gap, but it would require quite a bit of milling to make it the right shape.  With some careful measurement and layout work, I was able to scribe 7 lines on the walnut that approximated the shape I needed, and then some freehand table saw work got that right.  Then I used my planer to get the thickness right.  When I plopped it into place it fit like a glove!  All I needed then was some Watco and glue, and presto! we had a hole-less threshold.  Now I need some caulk of the right color (just ordered) and the job will be complete.  Nobody looking at that would have any idea how complicated it was to put that in!

Today is the last day of nice weather in the forecast, and therefore most likely the last day before winter sets in hard.  Tomorrow we've got rain and snow in store.  That means I have to scramble today to get prepared for the winter: putting tractor accessories in the barn, picking up hoses and sprinklers, preparing the snowplow, etc.  I expect to be busy all day on that sort of thing, and tired this evening when we go to puppy class.
Posted by Unknown at (permalink) 6:11 AM