Paradise ponders...  Well, it now seems pretty certain that we are more regularly visited by deer than we thought.  Here's the “take” from our trail camera from last night:

The photos are time-stamped; our visitors appeared from just before midnight until just after 3 am.  Night-owls, to be sure!

The trail camera also caught about a bazillion photos of our neighbor's dog Annie, plus this one shot of a kitty (at right).  There were also perhaps a hundred frames that showed no animals of any kind – I'm guessing those were triggered by birds flying across the field of vision so fast that they were missed, or perhaps by the wind blowing branches around. 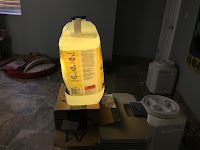 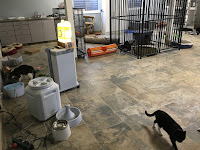 This morning when I was doing the kitty chores, I saw the rather startling sight at right (the rightmost photo).  That's a kitty litter jug, filled with water, acting as a weight on the cardboard box below it.  That cardboard box, in turn, stops one of our cats (Konani, aka “Devil Cat”) from playing with the controls for the air filter below it.  That jug is glowing as if it has a light bulb in it, but it certainly does not.  So what was going on? The other photo, from the opposite side, shows that the jug is illuminated by a small ray of sunlight poking in from a basement window.  This particular alignment only lasted 60 seconds or so.  Pretty cool while it lasted!  Even some of the cats were intrigued, and the aforementioned Konani went over and smacked at the jug to see what would happen (nothing!). 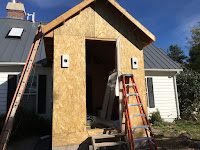 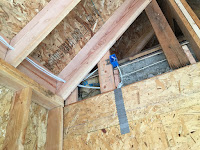 I spent most of today working on the electrical wiring for our new mud room.  I had one small disaster occur while working today: the plate for the motion sensor split in two places while I was screwing it in.  I'll have to make that one over again; a job for tomorrow.  The plates for the lights themselves are in, as you can see in the rightmost photo.  It's not obvious at the moment, but the doorway will actually be much larger than the existing hole; those lights will be slightly closer to the door than they are to the edge of the mud room.  Inside the mud room I have all the boxes in place except for the three outlet boxes on the east side.  The chandelier box is installed, and I'm very happy with the way that came out.  Much of the wiring is in place, including the fairly complicated wiring for the lighting controller.  There is also one more switch box to install, but I can't do that until we receive the front door, so I know which side it will open on (that's the side where the switch will go).  The left photo shows a small bit of detail that was interesting to work out.  The junction box is just a distribution junction for outlets; nothing exciting there.  But see that vertical row of steel plates?  Those are “stud guards”, intended to be hammered into a stud to prevent nails from puncturing a wire or pipe underneath it, where it transits the stud through a drilled hole.  I'm using them for a completely different purpose here.  I cut a channel in the OSB sheathing behind those plates, and routed three Romex cables through that channel.  Just before they get to the bottom of the steel, the three wires plunge through the insulation between the studs.  I'm hoping I can talk the electrical inspector into accepting that.  I have a good story all queued up! :)  The inspectors here are quite common-sensical, so I'm not really too worried about that.  One of those cables carries power for all the mud room's lighting, another connects to a three-way switch inside our house, and the last one carries power to an outlet box below.
Posted by Unknown at (permalink) 4:36 PM