This photo is undated, but from my dad's appearance I'd guess it's the late '90s or early '00s; he'd have been about 75.  I recognize that jacket – he had it on several of the trips we took together, and often wore it in the cabins or B&B we stayed in: he liked to be warm.  It's a bit unusual for him to have been out in bright sunlight without a hat – he was always careful about provoking the skin cancers that he hated getting “burned” out (with liquid nitrogen).  There are a few other photos in this series that I'll post later; they include other people I don't know, but I'm guessing they were other horticulturists at some sort of function, possibly when my dad got an award.  He's standing in front of a specimen of American holly (Ilex opaca), the plant species he spent so much time studying and growing; I'm sure that background is not accidental.  It wouldn't surprise me a bit to find out that it was one of his varieties.

The lab dates this as August 1960; that's my dad and my brother Scott.  They would have been 34 and six and a half, respectively.  The fuzz visible below my dad's chin is glued to the original photo somehow; I was afraid to try to remove it.  I love the expression on both their faces.  I have so many memories of my dad's smile, with his jutting lower jaw and those wrinkles like a cartoon character... 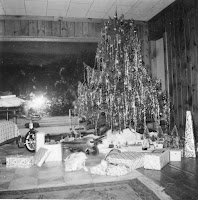 This photo is undated, but from the gifts and some other photos I've already posted, I can say it's the Christmas of '55, taken in our living room.  This one was taken before we opened the gifts – my guess is that mom or dad snapped this on Christmas Eve after they set all this up.  One thing I see here I remember: the little Christmas trees just under the right side of the real Christmas tree.  Those were decorations that we had for years afterward.  To the right and behind the Christmas tree, you can get a good view of the closet we had in that space before my parents had a games closet installed high.  Inside that closet you see there was a very awkwardly shaped space created by the ceiling of the stairwell for the stairs down to our basement.  Sometime after '55, they took out the frame of that door and paneled it up with matching knotty pine paneling, making a fairly well-hidden and high built-in cabinet that we used for storing board games and the like.  I remember the carpenters trying hard to match the paneling when they did that work – I learned a few words I'd never heard before. :)  That brings up another memory of mom and dad: when we were young, it was very rare for us to hear either of them utter any word more vulgar than, say, “Darn!”  As an adult I discovered (as did my siblings) that both of them had a rather well-developed set of four-letter word vocabularies – my dad's mostly acquired during the war, in the Army Air Force, and my mom's from her dad and his circle of friends.  My own vulgabulary gained more from them than I was ever able to teach them. :)

The lab dates this as February 1954, and my mom wrote “Tom” on the back.  That's my dad standing in front of a magnificent Ilex opaca specimen on our farm.  I remember that particular tree; it stood along our driveway to the north of our house, and was a particularly fine example of the variety “Old Heavyberry”, which was discovered and developed by his dad (my grandfather) Earle Dilatush.  That particular specimen was one of the last of the large hollies on our farm that was sold and moved – labor got too expensive after that, and the giant tree-moving equipment available today hadn't yet been developed. 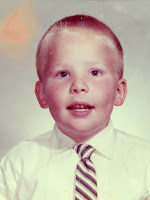 This little fellow is my cousin Donald, son of my uncle (my mom's brother) Donald.  I don't remember ever meeting him.  The photo is undated.  My mom wrote on the back, in fountain pen “Donald MacLaughlin son of my brother Donald”.  Because of the fountain pen, I'm guessing it's circa early '50s.

My sister Holly, in an undated and unmarked studio portrait, possibly a school portrait.  I'm guessing she's about five or six, which would put this in '60 or '61.  I think I may have posted one much like this before, but I can't find it now.  The mark on her forehead is damage on the photo original, not on her head (though such an injury might explain some things :).  I'm sure you didn't miss it, but just in case: that's quite a gap in her teeth she's got there! :)

This one has handwriting I don't recognize, saying “The reason for the frown is a bad head-ache.” – followed by my mom's writing, in fountain pen: “Donnie Over”.  My mom's sister (my aunt) Betty was married to William Over, so I'm presuming that Donnie is their son (so my cousin).  I don't remember a cousin Donnie, though.  The photo is undated, but from the Army uniform he's wearing, it must be WWII or Korean War era – mid-'40s to mid-'50s.  There are sailors in dress blues in the background, and a ship, so I'm guessing he's at a port either returning from or going to a troop transport.  The plants look more like east coast than west coast (assuming this is in the U.S.); beyond that I can't tell what the location is.  Another clue on the time: note that the can of soda or beer he's holding is an old-fashioned steel can with the rolled lid.
Posted by Unknown at (permalink) 6:47 AM