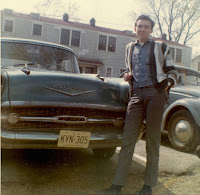 On the back, in my mom's fountain pen handwriting: “Buster Patterson Sister Lillian’s Son”.  That confirms that my mom had a sister (and I had an aunt) Lillian, and she had a son named Buster.  I do have a vague memory of someone named Buster – whether just from talk or having met him, I can't recall.  The photo is undated, but from the cars I'd say it's late '50s or early '60s. 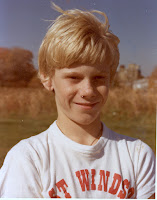 This young man is named Demming Sennett.  On the back, in my mom's handwriting: “Demming Sennett Tom’s ‘Little Brother'”.  My dad was a volunteer for the Big Brother program for many years.  He had a longer relationship with Demming than with any of the other kids he helped.  I'm sorry to say that our family has lost touch with Demming – it would be good to know how he's doing.  The photo is undated, but from his apparent age I'd guess it was taken from the mid-to-late '70s.  I didn't know Demming well, as dad started with him after I'd left home to join the Navy.  I did meet him several times on my visits home, including one all-day trip he and I took with my dad to the mountains (or so the New Jersey natives style them) in northern New Jersey.

This is me, in an undated studio portrait.  I'm still surprised by how many studio portraits my mom had of us kids.  I don't remember sitting for so many photos!  If I'm eight or so in this photo, then it was taken circa '60.  The awful color balance is due to the cheap photo paper, much faded on which it was printed.  One thing that strikes me: I see no hint of my adult face in my childhood photos, while I do in the photos of my siblings.  Is that just me, or did my appearance really change more than theirs?

My brother Scott, clamming in Maine.  If you're not familiar with this activity, for kids it basically means walking out into deep black mud and digging with your hands for the clams.  Adults do it (usually) with shovels or clam rakes, and wearing boots in a (usually) futile attempt to stay clean.  Kids ... just revel in the muck.  I remember some photos of Scott and I doing the same thing, but quite a bit younger – haven't found them yet.  The lab dates this as December 1959, but it was almost certainly from the summer of that year instead, when Scott would have been five and a half.  The perfect age to be sent out into black mud!

On the back, in my mom's handwriting: “Donnie Over”.  That would be her sister (my aunt) Betty's son (and my cousin) Donnie, the one I can't remember.  The photo is undated.  Note the heavy load of Brylcreem! :) 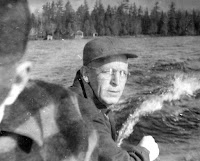 This photo is a bit of a mystery to me.  It's undated, on the back in my mom's handwriting it says “Paul Jay”.  I don't recall ever hearing that name before.  The location I can identify: that's Long Pond in Maine, with some typical “camps” along the shore.  The man whose shoulder is visible in the foreground could easily be my grandfather Donald MacLaughlin, though not enough is visible to be certain of that.

The lab dates this photo as April 1960.  In my mom's handwriting on the back: “Bus Sturgeon Lincoln Maine”.  I remember that gas station – perhaps Bus owned it?  My clearest memory of it is in the repair bay, where over the tools there was a Ridgid advertising calendar. :)  I also remember the fascinating collection of mysterious tools, automobile repair specialties that we didn't have on the farm.  I don't really remember Bus at all.

Finally, here's a nice studio portrait of my brother Scott.  It's undated, but I'll guess he's seven, making this taken circa '61.  His face is recognizably similar to his adult face.  I sure remember those incredibly thick plastic-framed glasses – I had a pair just like them!  Scott in a suit is a rather disconcerting sight, though – a bit like seeing a marmot wearing dress shoes...
Posted by Unknown at (permalink) 7:17 AM