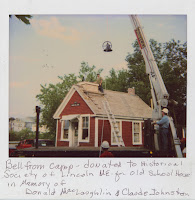 I don't know the whole story behind this undated photo.  This is a Polaroid, of all things, and the chemical packet left enough room for my mom to annotate it on the front.  I don't think my mom ever owned a Polaroid camera, so someone else probably took this photo and gave it to her.  Also, I think this donation likely occurred sometime after her last visit to Maine.  I remember the bell at the camp; it was a Sears & Roebuck bell very similar to the one we used to have on the farm I grew up on, except the one on the farm didn't have the big ringer pulley (it had a clapper handle instead).  Also, the one at the camp was perhaps 50% larger than the one on our farm.  Maybe one of my siblings will know the whole story?

This undated photo has my mom's handwriting on the back: “Donald MacLaughlin, Elinor MacLaughlin Dilatush”.  In addition, scribbled out is “Joe Lounsberry”.  That Donald would be my mom's brother (my uncle) Donnie.  I don't recognize the venue and I have no idea what the occasion might have been (quite likely, simply a get-together).  From my mom's appearance, I'll guess this is circa mid-'90s.  I have no idea who Joe Lounsberry was, or why his name would have been written and then crossed out.

My sister Holly spent a year or two in South Korea teaching English to Korean students.  On the back, in my mom's handwriting it says “Holly & Students ‘04”.  The camera dated the photo as January 23, '94 – and I suspect that means that my sister didn't know how to set the date and time on her camera. :)  I'd not seen this photo before, and having traveled quite a bit in Korea myself (and having several Korean friends), I'm struck by the appearance of several of her students – they don't look like the Koreans I've known.  The boy with the blue shirt, and the girl on the far right do look like Koreans I know; the other three do not.  I'm not sure what part of Korea my sister was in, but it appears to be an area ethnically distinct from the areas I know.  But I've glossed over the really important question here: why is my sister wearing a lobster hat?  Also, why is a flat of bean sprouts being displayed in an English class?  There are mysteries here...
Update: my sister responds:

Baltimore is quite proud of its crabs.

These were kids in Charlottesville, at a school where I taught ESL (few months, substitute position), a couple of years before my trip to Korea.

Here's a photo I remember – a larger version of this photo, framed, hung in our camp in Maine.  On the back, in my mom's all-caps printing: “SLIVER STURGEON, LINCOLN, MAINE”.  Sliver's holding up that tiny white perch and I remember that there's a funny story behind this ... but of course at this remove I've completely forgotten the story.  Maybe one of my siblings will recall it.  Sliver was a fanatical fisherman; the very idea of him catching and keeping such a tiny thing is faintly ludicrous.  Most likely he's on Long Pond (where our camp is), near Lincoln, Maine.  The photo is a modern copy of an older original; it's undated and I don't have the original. 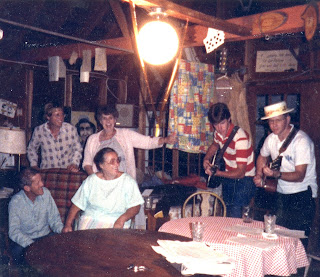 This one is a real memory-jerker.  This is taken inside our camp in Maine.  On the back, in unfamiliar handwriting (with a felt-tip pen): “Scott Joyce Tim Donny Tom Elinor Dilatush after supper their camp 8-85”.  So that dates this to 1985, and my mom and dad's appearance is consistent with that.  They're both seated at bottom left.  Joyce is just behind my mom; my mom's portrait of Doc Johnston is hanging behind Joyce, and left of her is my brother Scott.  I don't remember Tim and Donny, but that must be them playing guitars.  The camp's inside is festooned with plaques and photos and paintings, as I remember it.  The manic expression on Joyce's face was one we often saw. :)  So many good memories from that camp.  Damn it, now I'm bawling...

Finally here's Loni Sturgeon (Sliver's wife) in an undated photo.  I'll guess this is circa mid-'90s.  On the back, in my mom's handwriting: “Loni Sturgeon & ?” The question mark is the lady holding up the blue napkin to hide herself; Loni is the lady smiling away.  I don't recognize the venue.  I know that Loni and my mom were good friends.  On a visit to Maine that Debbie and I made in the '80s, she was one of the people that my mom very much wanted me to meet.  We had lunch, my mom, Loni, and I, in a little cafe in Lincoln.  The entire idea of a cafe in Lincoln was rather startling. :)
Posted by Unknown at (permalink) 7:44 AM