Paradise ponders...  It's been raining now for most of the past 24 hours.  I haven't looked at my rain gauge, but I'm guessing we've got well over an inch already.  It looks like the rain is likely to continue for at least a few more hours today. 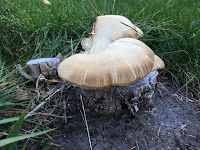 Walking the dogs during a lull in the rain yesterday, we came across this nice example of a shelf fungus, growing on the sawed-off stump of a box elder tree.  Cabo was very curious about it, but (unusually) didn't try gnawing on it.  Seeing this brought back a memory of my uncle Donald (my dad's brother) – for a period of 20 years or so, he went to extraordinary lengths to photograph and document examples of shelf fungi in New Jersey.  This corresponded with the time (late '60s) when I was just starting to get into photography, and I was eager to spend some time with him to learn.  He didn't have much money, so his camera was relatively simple: a 35mm Leica with excellent optics, but that wasn't an SLR (single lens reflex).  Because he was doing macro (close-up) photography, that meant he had to focus the camera by measuring how far it was from the subject, and he had to align the camera's view by using a purpose-built jig he'd made.  Each of his photographs would take him 10 minutes or more to set up: homemade reflectors for proper lighting, careful light level measurements, setting the focus and exposure, and so on.  When he finally took a photo, it was sort of anti-climatic!  But I will say that I learned an awful lot about the basic physics of photography from him.  He took the time and trouble to explain everything he was doing, and he did a better job of it than most photography books do.  One thing in particular I learned from him was about depth of field, and the use of high f-numbers to get more depth... 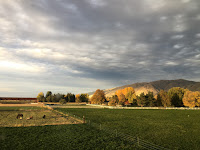 Saturday evening I glanced out the window of my office when I heard the rain stop for a moment, and this is the scene I saw.  The horse, cows, and sheep belong to a neighbor's family; their house is just out of the frame to the left.  The field to the right belongs to another neighbor; their house is under the beautifully lit up trees in the middle distance.  Their three dogs are just barely visible in that field, toward the right of the frame.  They were barking and playing joyfully when I took this photo.  Their horses now have the run of that alfalfa field, as the last mowing for the season has been done.  This makes them very happy! :)  At the left of the frame, right on the horizon, you can see the steel skeleton of a huge workshop that a fellow three houses away from us is building.  His immediate neighbors are in a bit of a tizzy – what he's building looks very industrial or commercial, and in fact he owns a metal-working business.  So the suspicion is that he's really building an arm of his business, which would not be allowed on this land.  He's being watched. :)

I've been cooking quite a bit recently, especially as Debbie has been less mobile the past couple of weeks (but getting better!).  Below are two recent productions.  At left is a chicken pot pie, using a recipe modified to be low sodium (as Debbie's on a strict low-sodium diet).  I thought it was delicious, but then I really don't like the taste of salt in the first place.  Debbie ate it readily enough, but with a sad sack face – she really, really misses the taste of salt in her food, and the salt substitutes just aren't cutting it for her.  At right is my homemade sweet-and-sour beet salad, using beets from our friend and neighbor Tim D.'s garden.  That came out just hands-down, brains-falling-out delicious!  It could hardly be simpler to make: I just cubed the beets and boiled them until tender, and made the sauce with equal parts oil (use whatever kind you like), sugar, and vinegar (I prefer cider).  I added just a touch of sage and tarragon, too.  Yum! 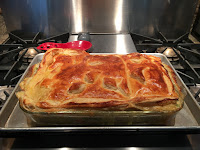 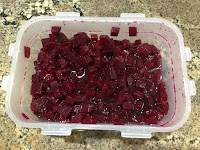 Posted by Unknown at (permalink) 5:11 AM