This photo was a bit of a shock for me.  My best friend in high school was a fellow named Joe Trembula.  I can't recall how we met, but we knew each other for several years before I joined the U.S. Navy in 1971.  We had lots of adventures together, and a whole lot of wholesome fun, mainly outdoors.  Most vivid in my memory: the several trips we took in the “war canoe” that he built out of oak and 3/4" marine plywood.  He and I were in the draft lottery the same year, and we both had very low numbers – low enough that we were certain to be drafted.  He and I spent many afternoons talking over our various options, mainly the following: being drafted into the Army, enlisting in the Navy or Air Force, or to go to Canada and join the other draft dodgers.  Joe had an unusually firmly developed moral compass for someone his age, and it didn't necessarily point north all the time.  Going to Canada was out of the question for him, and he was appalled that I'd even consider the notion for myself.  Joining the Navy or Air Force was ok with him, but not for the reason that it appealed to me (two years of guaranteed stateside schooling).  Eventually he did join the Navy, but he refused to take advantage of that guaranteed schooling. In my last conversation with him, in 1971, he was quite angry with me for violating his code of ethics.  We never spoke again, and he never answered the letters that I wrote him.  His father (especially) was very friendly with my parents, and even bought a couple acres of land from my dad for a place to garden.  He wouldn't speak with me, either, after that last conversation with his son.  But his dad kept my parents in touch with Joe, and that must be how my mom got this photo.  On the back it says, in unfamiliar printing:

And in my mom's handwriting: “Joe Trembula and family”.  I never met Joe's wife Ruth or his family, obviously.  My mom called me about five years ago to tell me that Joe had taken his own life, after struggling with depression after his son Daniel (the little boy in the photo) died.  My mom believed that Daniel had also taken his own life.  I found the obituary at left online, from a newspaper in the area where he was living when he died, in south-central Kentucky.  Joe was very moody as a kid, and had deeply held beliefs mainly based on his dad's (equally strongly held) beliefs.  My own experiences with him would lead me to believe he was about as gung ho and positive as a person could get.  The notion that he would commit suicide is really hard to accept...

On a happier note, here's a photo of a beautiful tree in a swamp.  In the foreground there's a bit of something that just might be a boat or canoe.  The lab dates this December 1997; it has no notes on it.  I'm going to guess this was taken somewhere near Virginia Beach by my brother Scott; it looks like the sort of scene he'd be attracted to.  He'd probably paddle 100 miles to get to it just to take the photo, too. :)

This is a wonderful image of my mom's dad (my grandfather) Donald MacLaughlin.  There are no notes on the back, and it's undated, but it has been handled often – there are creases and folds all over it.  I suspect my mom kept this in her wallet or some place like that.  I don't recall ever seeing my grandfather in a suit, and I have no idea what the occasion was that caused him to get prettied up.  From his appearance, I'd guess this was taken circa '60, plus or minus a few years.  That happy face was his normal face; the wrinkles and creases on his visage were those required to make it look just so. 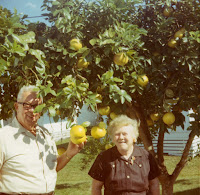 What a memory trigger this photo was!  On the back, in my dad's printing: “Joe Reidel + Mary”.  The photo is dated November 1970 (by the lab), which is after they moved to Florida (which in turn is why they could have a grapefruit tree).  Oh, I remember these people very well!  We visited their home in northern New Jersey quite a few times when I was growing up.  They had several different dogs over the period I knew them, but I remember best their two dachshunds – they loved to play with us.  Both Joe and Mary were really nice with us kids.  Mary would sneak us treats when she thought our parents weren't looking.  She was a good hugger, too. :)

Finally, here's someone I know my parents knew well: Ray Shea Jr.  I met him and his dad just once that I can recall, when I was home on leave from the Navy in the mid-'70s.  on the back, in unfamiliar writing:

I'm not sure why the last name is spelled two different ways...
Posted by Unknown at (permalink) 3:38 PM