Paradise ponders...  Well, today wasn't the easy day of progress on the mud room's electrical wiring that I was hoping for.  For starters, yesterday I cracked (again!) the plate for the motion detector.  I threw it in the trash and spent several hours fabricating a new one from scratch.  This took much longer than I anticipated because I had to make two runs: one for a jigsaw blade, and another for scroll saw blades (the latter run took me all the way into Logan).  However, I did take some photos of the process this time. 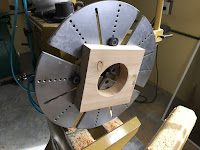 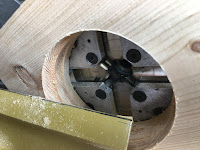 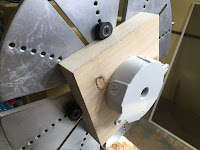 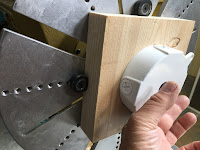 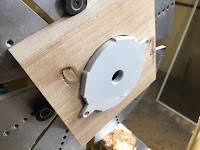 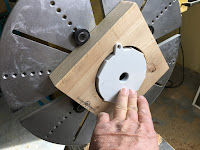 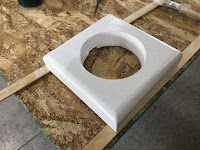 The steps involved were:
Tomorrow after the primer is dry, I'll be drilling pilot holes for the screws.  They're just too big in diameter to safely screw into this wood.

I also mounted a new entry set (latch and lock) on the door between our laundry room and our garage.  The old set had worn out.  Naturally, after I took the old set off I discovered that the hole for the lock was not the standard (2 1/8") diameter.  To make it more challenging, the door is a steel security door.  Sigh.  So I used a jigsaw with a metal blade to enlarge the hole to the right size.  That was surprisingly challenging to do; the uneven surface of the door made it hard to keep the jigsaw upright.  I solved that problem by using a small piece of plywood as a flat platform for the saw.  I needed about three hands to do that!

This afternoon I had a lovely walk with the puppies.  To switch things up, I walked them through a new part of the neighborhood to our northwest.  We met lots of new dogs, several new adults, and a few curious kids.  Most surprising was the kitty who came running out to meet the new puppies!
Posted by Unknown at (permalink) 4:37 PM