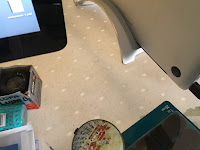 Paradise ponders...  When I sat down at my “desk” (actually a folding table), I saw the pattern at right on the desktop.  It looked like a piece of pegboard (or something similar) was blocking all the light except for some small holes in a regular pattern.  But when I waved my hand over it to see from the shadow where the light was coming from, the spots didn't get shadowed at all!  What was going on here?  A quick feel under my desk solved the problem: there is a pattern of indentations that exactly match the bright spots, and the early morning sunlight made a puddle of light directly under my desk.  Those spots were caused by light shining through the thin spots in my desktop! 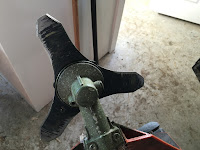 I spent several hours yesterday morning (which was nice and cool – 48°F when I started) whacking weeds.  I had some weeds that were towering over my head, and were threatening to go to seed sometime soon.  That's the sort of thing that would get my neighbors over here for an intervention :)  I have a nice Stihl two-cycle weed whacker, and I use a three-bladed steel blade on it (at right).  I prefer the four-bladed version, but last year I managed to break mine on a rock so I'm using my “spare”.  These steel blades just replace the string dispenser more commonly found.  I learned about them around 15 years ago when we lived in California – found them online from an Arizona supplier.  They aren't legal in California unless you're licensed, but I chose to ignore such a stupid law :)  They really are considerably more dangerous than a string trimmer – they throw rocks, and they'll chew right through things that a string trimmer wouldn't touch (PVC pipes, tree trunks, etc.).  Here in Utah they're perfectly legal, and I can buy replacement blades right from the local supplier – nice!  Anyway, I whacked roughly a half acre yesterday, with the biggest piece being along the south side of my barn where I had a veritable forest of weeds.  This morning it smells like fresh-cut hay – very nice!

Yesterday afternoon I started catching up on a mountain of paperwork that's been building on my desk.  This morning I'll finish that, and then (I hope!) I can start working my way through my mom's belongings that are now stored in my barn.  There will be some sad moments as I do this, I know.  Some of them we'll be keeping, some will go to Scott, some will be shipped to various and sundry relatives, but the bulk, I think, will be donated.  We may be able to find good homes for some things, but much will go to Deseret Industries – an organization of the Mormon Church that does a great job getting used goods out to people who could use them.
Posted by Unknown at (permalink) 6:52 AM