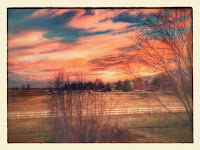 Paradise ponders...  Google created the photo at right, taking the photo I posted yesterday and “stylizing” it.  I didn't ask them to do this (though I don't mind).  I wonder what their objective is?  I really don't have a clue!  There's no link offering to sell me printed copies, or anything else that might generate some revenue from the photo.  They're just doing it, to several photos a week.  Weird.

Somehow I managed to get everything done yesterday that I had planned to do.  It doesn't usually work that way :)  All my winter-sensitive gear is now in the nice, heated shed – and the snowplow is mounted to the tractor.  The only thing that was challenging about that entire effort was removing the backhoe.  There are two large pins (about 2" diameter and 8" long) that hold the backhoe onto the back of the tractor.  Everything has to be perfectly aligned in three dimensions, plus all the load taken off the pins, before the pins can be removed.  The first pin was easy – took me all of 30 seconds or so.  The second pin took a half hour.

One of the things on my list yesterday was to remove two large apple logs from the back of my pickup.  They've been there for a few days; I was waiting for some decent weather before hauling them off.  There's a story behind those logs...

Several months ago, I went to Zollinger's Fruit and Tree Farm, where I bought quite a few plants.  Somewhere in that process, I got to talking with Ron Zollinger, and he mentioned that toward the end of October he was planning to cut down an old orchard on the farm.  The trees were over 40 years old, not producing well, and many were not healthy.  I told him I'd love to have a couple of the trunks from those trees – I could slice them up and turn them into bowls on my lathe.

Well, he didn't get around to cutting down those trees until two weeks ago.  Just before they started cutting them down, Jake (his son) called me and told me I could come up and mark the trunks that I wanted.  Then a few days later, Jake called and said I could come pick up the logs.  So this past Friday, I drove up and they loaded them into the back of my truck with their forklift.  I'm guessing that the bigger of the two was close to 300 pounds, and the smaller about 2/3 of that.  Two beautiful big logs!  They wouldn't accept anything for them; just sent me on my way with a big smile.

Now I'm the proud owner of two gigantic apple logs.  These will need to dry out before I can turn them – probably a couple of years.  To keep them from cracking, I need to coat the ends with something airtight.  Paraffin wax used to be the standard way to do that, but recently I read that latex paint works just as well – and that's a heck of a lot easier than wax!  So today I'm going to paint all the cut ends.  I'll keep them in the heated part of the shed until spring, then I'll take them up to the second floor (except in winter, that's the warmest part of the shed).  I'll check them in about a year and see if they've dried out.  If not, I'll wait another year.  Cutting and turning something that big (the biggest of the two is 20" in diameter) will be fun!

Today I have to go get blood drawn – third time in the past few months.  My blood levels of cobalamin (B12) have been a little low, and I've been adjusting the dose of the injections I give myself.  Hopefully we zero in on a new dosage before I run out of blood to give the vampire ladies :)

We're also taking my truck in for a once-over by the good folks at Hyrum Tire.  This is in preparation for the longest trip my old (2007) truck has ever made: to Virginia and back, and we'll be pulling a trailer on the way back.

Look what our weather is supposed to be like for the next couple of days (click to embiggen)!  That looks downright wintry!  There's a cold front moving through as I write this, and the next week looks like colder-than-normal weather.

I'm leaving next Wednesday for Virginia, and I was slightly worried about whether I'd run into snow on the way there.  Looks like I'll miss that.  I'm taking a southerly route, so there shouldn't be any cold weather other than the first day of the trip.  I'm doing the same thing on the return trip, so our only risky day there is the last day, on the way home.  Fingers crossed that we don't get a mid-December storm!
Posted by Unknown at (permalink) 6:12 AM