If you are ... a PCA (Programmer of a Certain Age), then you'll no doubt remember – and fondly – the HP-16C “Computer Scientist” calculator.  That's a photo of it at right (not mine, sadly).  I bought one of these shortly after they were announced in 1982, and I put lots of hours on it.  It was useful not only for programming, but also for digital hardware design (and especially for debugging).  Sometime in the early '90s, when it was on my lab table and I was soldering, I killed it by dropping the hot soldering iron on the keyboard.  Those keys work very poorly when melted to the case :)

I was seriously bummed when I discovered that HP no longer made them, and I couldn't get a replacement. 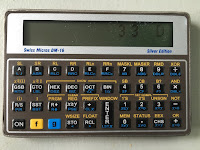 But I was all smiles when I found out that a guy in Switzerland had started a company (Swiss Micros) to make emulations of all the old HP calculators – including the HP-16C!  His version of it is called the DM-16, and it's quite a faithful copy of the original – but with a more modern (and powerful) computer inside it, and a much smaller form factor.  Oh, and also a titanium case! Naturally, I ordered one immediately – and today I received it.  That's a photo of mine on the right.  Within a few keystrokes, I remembered how to operate most of it.  That sure brought back some memories!
Posted by Unknown at (permalink) 1:34 PM