Paradise ponders...  Yesterday I dug five more big holes (4' square, 30" deep) where our paper birches will be planted next Tuesday.  I did most of the digging with my little Kubota B26 backhoe, then cleaned up each hole with a shovel.  As I was doing this work, my thoughts wandered to memories of my dad.  He dug a lot of holes in his lifetime, to plant shrubs and trees.  So far as I know, he always dug them entirely by hand, with nothing more than a simple shovel.  I suspect he'd have scoffed at my backhoe.  He loved the physical exertion of digging holes; it was therapeutic for him.  When he was worried or tense, his habit was to go out and do something relatively mindless and physically difficult – and more often than not, that meant digging holes.  You might not think there was much skill to digging a hole, but if you'd ever watched him, you'd know that wasn't true.  If he was digging in good, loamy, rock-free soil, his actions looked like they were choreographed.  His shovel took precisely sized, perfectly placed bites out of the soil.  With a single economical motion, the shovel would be emptied into exactly the right place – without the tiniest bit of an extra joule being expended.  My efforts as a child, and perhaps even more so as an adult, were lame and pathetic by comparison.  He'd have enjoyed digging holes in Paradise, and I'll bet that only a shovel would be involved...

When I finished digging holes, we hopped into our truck and headed up Blacksmith Fork Canyon to gawk at the fall color, and hopefully to see some wildlife.  On the way out, as I was hungry, we stopped at McDonald's so I could try the “McRib” sandwich.  The only reason I wanted to try it was that several people I know rave about it – and I don't know anyone who raves about a McDonald's hamburger.  So I got my McRib, and I ate it, but ... I'm never going to get another one.  The meat was bland, so bland I couldn't even tell it was pork.  Mystery meat.  The barbecue sauce was more sugar than anything else – disgustingly sweet, slightly chemically tasting, without the slightest bit of interesting quality at all.  Blegh!

Fortunately the fall color in the canyon more than made up for the bad taste in my mouth.  Some photos below, all iPhone and none of them do it justice: 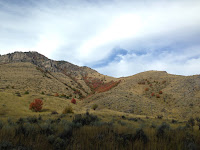 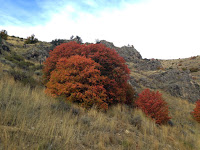 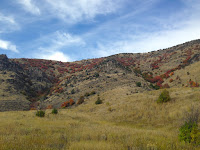 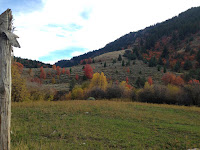 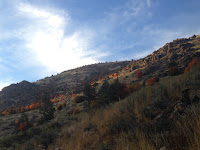 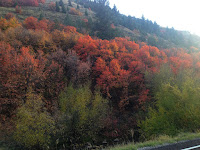 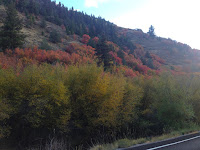 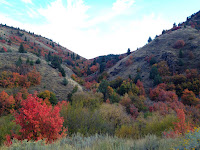 We're going back again on Saturday evening, even though it's the weekend (lots more of those pesky people!) when more color should have migrated to lower altitudes.

We did see some wildlife as well, particularly three does with single fawns.  Two of those fawns were still very young, obviously late births.  They were weaned, but still had spots and alarmingly little fat for the season.  They need to fatten up fast, or move down to where there's food all winter, or they'll be at risk.

This morning we made our first visit to the “new” Crumb Brothers, which opened this past Saturday.   We got there at 7 am, when they open their doors.  We both had croque madame (with Emmental cheese), with a biscotti for “dessert”.  We found out that our favorite bread (sunflower seed) will be baked fresh every Wednesday and Friday, available at 11 am.  We'll be back for that!

After we returned, with me in a croque madame coma, the boys (Miki and Race) and I headed out for our morning walk.  I managed to find yet another route variation, which pleased the dogs.  They get visibly more excited whenever we turn in a new direction.  Somehow they know all the places we've ever been before, and when we're going somewhere new.  The Clawson dairy folks mowed two big alfalfa fields a few days ago, and the windrows are still down drying.  This morning there were hawks perched all around those fields, with more hawks hunting for voles in low swoops, often no more than a couple feet from the ground.  We saw several of them make catches, and several others eating catches they'd already made.  Happy hawks, not-so-happy voles.  I'm ok with that :)

Some photos of our walk: 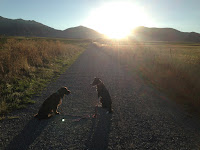 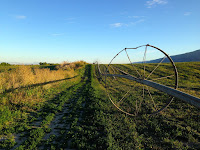 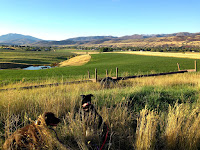 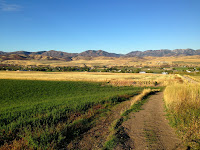 Posted by Unknown at (permalink) 8:54 AM