Progress in Paradise ... the Mormon horde edition...  Yesterday morning I had the last dental appointment associated with the root canal I had done.  This was for “restoration”, which in my case meant a silver amalgam filling.  This was to plug up the hole they drilled through my porcelain crown to do the root canal work.  Since the tooth had no nerves left in it, they didn't even need to numb me up for the filling.  As usual around here (but still new and awesome for us!), everything happened on time.  My appointment was for 10:30 am, and at 10:52 I walked out the door, finished.

The rest of the day yesterday I spent doing odd chores and cleaning up around the downed outbuilding.  We cleared out a lot of junk, and in general made a big mess, while disassembling that thing. 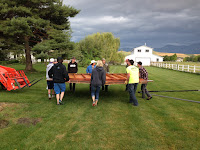 This morning, as planned, Steve and Janae arrived with a big fifth-wheel trailer ... and a horde (nine) of Mormon “young men”.  That term (young men) has a special meaning in the Mormon church wards; they're organized groups of young men that do things together, like the service project they did for me clearing out all that dead wood.  This group is from Steve and Janae's ward.  There were also a couple of friends and relatives, a bit older.  The group ranged in age from 14 to 22, but what they had in common was (a) muscles, and (b) enthusiasm.  At right is a photo I took as they moved the first section of wall.  With eleven people on it (twelve when I finished taking the photo!), it was easy enough to carry the whole weight between us – we didn't need the tractor at all.  Even lifting it over the fence and onto the rather tall trailer wasn't particularly difficult – although as I write this I note that my arms are a bit sore :)  In that photo I'm standing at the east edge of our back yard, looking due west.  You can see our shed in the background, and over it the stormy Wellsville Mountains.  That storm starting sprinkling on us just as we were finishing up. 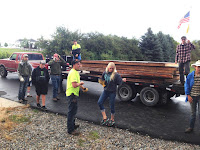 We had all six wall sections loaded up on the trailer in less than 15 minutes (at left).  It took another 20 minutes to strap them all down securely, put up hazard flags, and handle the donuts and milk that Janae (the blond woman in the photo at left) handed around.  The young men made a brief detour into my shop, to give me a hand moving my air compressor.  That beast weighs 650 pounds, and I needed to move it about 18" to one side.  I couldn't move it even a tenth inch.  It took them all of 15 seconds to get it exactly where I needed it.  They left a little while ago to head up to Steve & Janae's house, where this same group will help them unload the sections.  Then, in a few hours, Steve and Janae will head back down here with the trailer, and we'll load up the shelving, lighting, and a few other odds and ends that were in that building that they have a good use for.  They're also going to load up all the junk wood and dispose of it.  Then we're done!
Posted by Unknown at (permalink) 8:02 AM