Morning in Paradise...  Very early this morning – at about 12:30 AM – we were awakened by the loud crashing of thunder all around us.  For the next 45 minutes or so we were treated to a sudden fierce rain squall.  In the morning, when there was enough light to read the rain gauge, I saw that we got 0.6" of rain in that short amount of time.  Pouring, it was...

The forecast shows a decent chance of rain later today, too.  It's a wet July in Paradise!

We took our morning walk just a bit later than usual.  The sun rose over the Wasatch Mountains just as we got to the highest point of our walk.  In the first photo below you can see my loooong shadow reaching to the west as I look downhill toward our house.  The second photo is looking north, the third south, from the track that runs north/south through a farmer's field.  You can see the remnants of that storm cell receding to the north, over the city of Logan.  The third photo is looking south on that same road.  It's clear in that direction, except that if you enlarge the photo, you'll see some clouds hugging one of the smaller peaks.  Such ground-hugging clouds are a common occurrence around here, for some reason I don't know but would like to understand.  The last photo is looking west, and I've drawn a red arrow in there pointing to our just-visible shed.  Our house is hidden behind the trees just to the left of the shed. 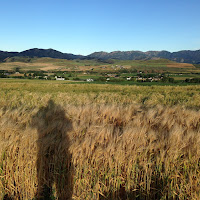 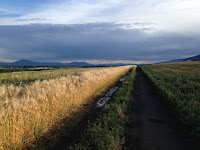 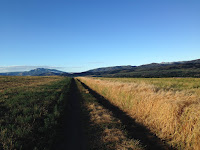 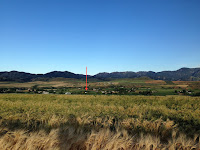 As we walked back toward home, we saw an ATV putt-putting up the hill toward us.  It was my neighbor Tim D., together with his two dogs (Lewie and Lexie), coming up to visit with us.  The two of us stood chatting with the valley laid out in morning splendor all around us.

I love living here!
Posted by Unknown at (permalink) 2:03 PM