Willows, drones, and other things...

Willows, drones, and other things...  My brother Scott finished pruning the weeping willow in our back yard yesterday, and it looks much nicer than it did before (a couple of views below).  Now I can mow under it, and our little tree farm (visible in the second photo) gets a bit more light than it had been getting.  Also in the second photo you can see the irrigation going on the field to our north (the one I'm in the process of buying).  Our Paradise Irrigation Company water was off yesterday while they were de-mossing; today its back on and up to 40 psi – so we're getting lots of water down on the field today! 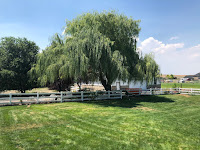 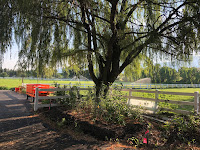 For several years I've periodically looked into the notion of buying a drone, primarily for photography and videography of natural landscapes and possibly some wildlife (especially nesting birds).  The main thing that's stopped me from buying one is really the fear of losing the entire investment when I crash the drone 30 seconds after unpacking it.

I've had some experience flying remote-controlled airplanes, and I know first-hand how confusing it can be to control something when you're standing some distance away.  This is a big contributor to the fear-of-crashing.  I'd be much more confident in controlling a drone if it had a camera pointing forward, giving me a view while flying as if I was a pilot in the aircraft.  These have recently become available, even acquiring their own name in the process: a “first person view” camera.  Such a live video view, as if I were a pilot in the aircraft, is a big confidence builder for me.

Another factor that looms large amongst the risks of owning a drone is the fear of losing the thing should there be a problem with the radio link, the battery running low, etc.  This is another area where the better drones have made fantastic strides.  Many drones now have a robust return-to-home feature wherein if something goes wrong, they fly themselves back to the point where they took off, land, and wait for you to come back.  Integral to that capability is the ability to avoid obstacles – and again, the better drones have amazingly good systems for detecting things they need to fly around.  Some of these detectors are acoustic (ultrasonic rangefinders),  some are infrared rangefinders, some are short-wavelength radars, and some are full-on optical rangefinders that use the same stereoscopic vision system that humans use.  Some drones have a combination of several of these.

Put all that together, and the result is that one can buy a drone today that is likely to survive a while.  I'm certain I could still kill it, but I'd have to try a lot harder than I would have just a few years ago.

There are even some drones available that have a separate, steerable, gimballed, vibration-isolated camera for shooting high-quality photos and video – while at the same time having all the safety and reliability features I described above.  Some of these cameras are very impressive in their own right, and a few of them use MFT (Micro Four Thirds) lenses – meaning there is a huge selection of high quality glass for them.

Yesterday Debbie caught me doing the check-out-the-drone thing again, and she told me to just go get one.  So I finally did it – I ordered a DJI Inspire 2 with the Zenmuse X5S camera option.  It should arrive within a couple weeks...
Posted by Unknown at (permalink) 8:18 AM