Irrigation ... is probably more challenging than you think.  That's especially so for a large pressurized system, which is how the irrigation for our home works.  We have 17 acres, 12 of which are irrigated alfalfa fields, and 3.5 of which are irrigated lawns.  I'm a shareholder in the Paradise Irrigation Company, as are all users of the irrigation system that supplies our irrigation water.  I've learned a lot over the past four years about how this system works, and I was quite surprised at just how complex it is.

The source of our irrigation water is the Porcupine Reservoir, located about 5 miles southeast of our home and 500 feet higher.  The Paradise Irrigation Company is just one of four irrigation companies that store and use water from Porcupine Reservoir.  All four of these irrigation systems are fed from a common “pond” at the base of Porcupine Dam, and this pond is fed from a manually adjusted gate at the bottom of the dam.  This gate is adjusted frequently, by hand, to keep the pond's water level roughly correct.  The consumption of water by the four irrigation systems is highly variable, so keeping this gate adjusted correctly is quite a challenge.  To an engineer like myself, this screams for automation – and yet such automation would add significant cost and complexity to the system, and would require ongoing maintenance, so it isn't done.  You would likely be surprised at just how small the budgets of these irrigation companies are – adding $100k or so for automation of this gate would be a huge increase.  So the gate is manual, and I suspect it will stay that way. 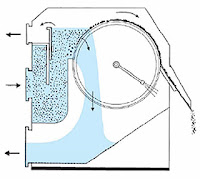 The common pond feeds four irrigation systems, but from this point on I'll be describing just one of these: the Paradise Irrigation Company's system.  It is fed from the common pond by a canal that runs a couple of miles to a point within the town of Avon, south of Paradise where we live.  The canal gets mossy in the bright summer days, and this moss can significantly impede the water flow – so two or three times a year the canal must be “de-mossed” – which is a chemical treatment that stops the water flow for a couple of days.  The de-mossing operation sends large quantities of dead moss through the system, which I'll talk about in more detail later. At this point the canal water passes through a large rotary screen to take out the larger chunks of junk in the water (and there's a LOT of it!).  This rotary screen is similar in concept to the drawing at right.  This screen only removes objects that are larger than about 1/2" in all dimensions – plenty of junk still makes it through, including some fairly large sticks and some very small mammals (like baby voles).  The slightly-cleaned water then passes through an adjustable gate (manually adjusted!) and into the high end of the pipe system for the Paradise Irrigation Company's system.  This intake is about 400' higher than our home, which means that theoretically the static pressure at our house should be about 190 psi – but we never see anything even close to that because of friction losses in the 4+ miles of pipe between that head end and our home.

Adjusting that manual regulation gate is the job of our company's “water master”.  People like to holler at this poor fellow when their pressure is too low, because most of them don't understand what an essentially impossible job he's got.  If all he had to do was to keep the pressure correct for one particular point in the system, it wouldn't be so bad.  But that's not what he does.  Instead, he's got a single point of adjustment where he's trying to keep dozens and dozens of users happy – and every one of them is getting water through different pipes with different volumes of water flowing at any given moment. I'm amazed that this works at all!  Just below the control gate, the Paradise Irrigation Company's system splits into three large pipes, each feeding large zones of a few square miles each.   The water usage between these zones can be (and often is!) hugely unbalanced – so one of those three pipes has far more water flowing than another.  All the people on the pipe being used more are going to have lower pressure from the friction losses.  All the people on the pipes being used less are going to have higher pressure.  There's nothing that the water master can do about that!  It's much, much more complicated than what I just described, though, because each of those zones are further subdivided several times.  The 6" pipe that feeds our place has four divisions (that I know of!) between it and the reservoir, and every one of them can be badly unbalanced.

The end result of this crazy system is that the water pressure in our irrigation pipes varies between 2 psi and 50 psi.  The pressure varies as users turn irrigation on and off in the hundreds of fields irrigated by the system.  The changes tend to happen in the mornings and afternoons (the common pipe-moving times), with large changes generally occurring over days rather than hours.  Our pressure is at 18 psi at the moment, but yesterday afternoon it was 40 psi.  Most fields are set up with sprinklers at 40' intervals, using nozzles that spray about 40' with 50 psi pressure.  This provides considerable overlap, which means that the entire field will still get watered so long as the pressure is above about 25 psi.  The lower 18 psi pressure we have right now means that there are portions of our alfalfa field that are not getting any water this time.  This happens on every field, and the farmers just live with it.

When I had the pop-up sprinklers installed for our 3.5 acres of lawn, I knew I had a more challenging situation.  I could only water this much lawn with the Paradise Irrigation Company water, as that's the only water I had the right to use in such quantity (water rights are real property in Utah, as in most of the western U.S.).  Those pop-up sprinklers are adjustable, but only within a fairly narrow range of pressure (such as mine, which are 45 - 50 psi).  Furthermore, the small pop-up sprinklers have quite small nozzles that cannot handle the up-to-half-inch junk in our irrigation water.  So I had a bit of a challenge on my hands to water my lawn using Paradise Irrigation Company water!

To my surprise, the local vendors who install and maintain irrigation systems did not have experience with this problem!  I ended up designing my own system, which has now been in place for a year and is working quite well.  I've had two irrigation companies come by to check it out, so they can use the ideas themselves.  I didn't really do anything all that innovative, it's really just that it's new to them here.  Paradise Irrigation Company water is connected to the inlet of an ordinary 5HP centrifugal pump with a synchronous electric motor, the kind that can survive moderate amounts of trash in the water.  This pump isn't directly connected to the power; instead, it's connected through a variable speed pump controller.  These have been available for about 20 years.  They work by converting the 60 cycle AC to DC, then back to AC but with a variable frequency.  The one I selected varies from 30 cycles to 75 cycles, which means the pump's RPMs can vary from 50% to 125% of it's nominal RPM (what it would have if connected directly to 60 cycle power).  Because the output of a centrifugal pump is not linear with respect to RPM, in the case of my particular pump the output can be varied from 30% to 120% of nominal – and that's plenty of range to let it regulate the pump's output pressure to 50 psi.    Finally, I run the output of the pump through a pair of screen filters (coarse/fine) so that everything larger than 0.05" in diameter is screened out.  These water filters are roughly 18" tall and 4" in diameter, and in normal use I need to clean them just a few times a year.  However, when the canal is de-mossed, the dead moss flowing down the line instantly clogs the filter completely, so I also have to clean them each time there's a de-mossing – and somehow that never seems to correspond with a “normal” cleaning.  :)

Now, isn't that at least a tad more complex than you thought an irrigation system would be?
Posted by Unknown at (permalink) 8:41 AM