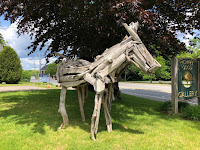 Days 8 and 9...  We left our lodging in Brunswick before 9 am, and traveled up the coast to Belfast, stopping here and there for art galleries.  It was really hard, but we drove right past Young's Lobster Pound without stopping, as we had a big dinner promised to us by my brother Mark and his wife Gina, so we needed to remain hungry.  We spotted this driftwood horse at a gallery near Rockport – it's distinctly inferior to one that my brother Scott is building now.  After that we made our way on back roads to the Tesla Supercharger at Brewer, Maine (just outside Bangor), and then north to Long Pond near Lincoln, Maine.  We got off the I-95 at Old Town and went the rest of the way on SR2.  We pulled into my brother's “camp” early in the afternoon.

If you click the screenshot at left to embiggen it, you'll see a red star in the rough location of the camp.  It's a beautiful spot, though it's a lot different than my memories of the place from the '60s.  Back then there were far fewer camps on the pond's shores, and none at all on the entire north shore.  Furthermore, the camps were mostly fairly rude shacks – now they're real houses, complete with all the modern amenities.  Sweet Road, which provide the access to all the camps, was a rough dirt road back then – now it's paved and smooth.  There used to be more trees around most of the camps; now many are in spacious clearings.  All of these things combined make quite a change in the character of the place – and it's not so much that the changes are particularly good or bad, per se.  The fact that they're different than my many memories is inevitably jarring as hell for me.  The photos below are all taken at Mark and Gina's camp: 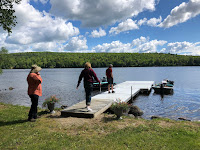 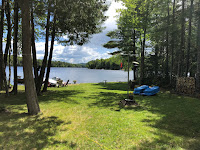 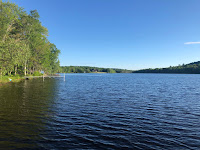 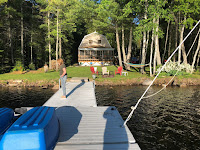 My mother called Long Pond her favorite place on earth; her experiences there filled her memory and her stories.  Most of all, I think, she loved her many friends in the area.  I was there part of about a dozen summers in my youth, and I remember how happy she was there.  The cabin that she first visited as a girl and every summer afterwards for close to fifty years is now gone.  It was falling apart, and was demolished a few years ago.  It was on a lot a hundred yards or so west of Mark and Gina's cabin, and they still own the lot.  They plan to build there, hoping to provide a place their kids and grandkids can enjoy as they do. 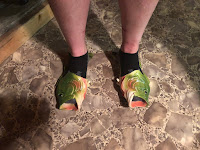 Of all my siblings, Mark is the one who comes closest to sharing my mother's love of Long Pond.  He also shares my mom's love of fishing, which explains why he's willing to be seen in slippers like those at right.  He and Gina are up there every year, and I suspect that Mark has been up here every year since he first came as a kid. 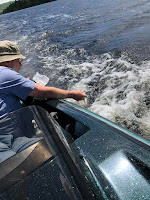 One of the few requests my mom made in her will was that her ashes be scattered on Long Pond, specifically off the point where blueberries grow (the locals all know where that is).  I am the executor of her will, so the responsibility for getting that done was mine – a duty I was happy to perform.  We did something like this for my dad a few years ago, scattering his ashes amongst the blooming azaleas of Dolly Sods, West Virginia.  Mark kindly offered me the use of his boat, complete with a driver, to get out to the right spot.  Debbie and John M. (a close friend of my parents) wanted to go with me, so the four of us headed out in the morning of June 9th.  The day before was the second anniversary of my mom's death, a coincidence that somehow seemed appropriate.  That's me in the photo at left, caught in the act of scattering some of mom's ashes.  It's hard to find the words to describe how I felt at the moment.  Memories of mom were flooding in, partly triggered by being in a boat on Long Pond, a scenario I spent many hours of my youth in.  The fact that I was finally able to complete her wish was more satisfying than I'd have expected.  It wasn't at all an unhappy experience, and I'm positive that's what mom would have wanted. 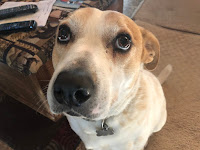 After mom's ashes were scattered, we had a burger-and-dog meal outdoors, sitting near the lake.  Tillie B., another old friend of my mom's (and someone I remember from my hormone-filled youth as one hot mama) joined us, and there was much pleasant conversation including many memories of mom.   When we came into the house to reload our plates, Mark and Gina's two dogs (one of whom is at right) would get very attentive.  Obviously they were hoping a stray hot dog would fall off someone's plate! :)

Mark and Gina had told me I was welcome to wire into their camp's electrical panel to charge up our car.  I was all over that offer, and before we'd left Utah I bought all the parts required to do that.  I'm not sure Gina was thrilled with the redneck wiring job I did, but it all worked great in the end – our car was fully charged before we left, and I put their electrical panel back together again.  It even worked when I got done!
Posted by Unknown at (permalink) 9:49 AM