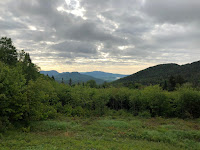 Day 7...  The Utahans make it to Maine!  We left Plymouth, New Hampshire bright and early and headed up the road a bit to the supercharger in Lincoln, New Hampshire.   Then we headed by back roads roughly straight line from Lincoln to Freeport, Maine (where another supercharger resides, behind the L.L. Bean “flagship” store).  This path took us through beautiful hilly scenery (the hills the locals call the Appalachian “Mountains”) that Debbie had never seen before.  An almost randomly selected scene is at right, for the purposes of illustrating the following discussion: how strange these eastern forests look to a western eye.  There are several things that stand out to us.  Foremost is the amazingly large quantity of greenery: an acre of this forest must have ten times the chlorophyll of an equivalent forest out west.  Then there's the number of species of trees.  Most western forests have just a few species; a forest with a dozen common species would be unusual.  Here we saw several dozen species while standing in one spot!  Next is the near absence of mature trees.  Nearly everywhere we traveled, we saw young forests like this, with most of the trees appearing to be roughly the same age.  I'm guessing this is the result of clear-cutting, though it might also be forest fires (though we didn't often spot evidence of them).  Also odd to us: the lack of obvious forest mix changes with altitude (mostly likely because there simply isn't much altitude change) or exposure.  The “mountains” here are blanketed with nearly uniform forests.  Out west, we'd see distinct and easily visible changes with altitude, on the north or south sides, and along ridges or in gullies.  The sum of all these effects makes these eastern forests look quite odd to us...

All along the route we took today we spotted rhododendrons (both horticultural varieties and apparently wild ones) and lupines.  I remember the rhododendrons from my childhood visits to Maine, but not the lupines!  Here are a few of the hundreds of beautiful spots we passed: 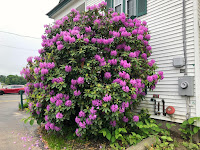 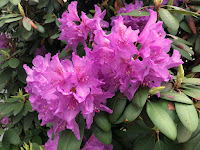 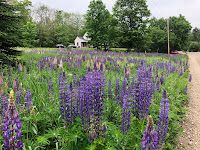 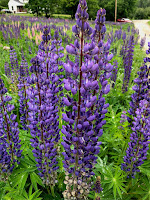 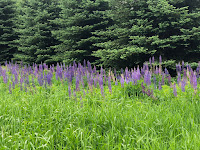 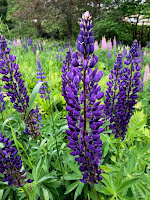 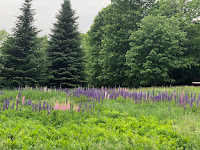 We arrived at Brunswick (where our next lodging was) with lots of time still left in the day.  After checking in, we headed up the coast toward Belfast (more on that place later) along what we remembered as a sort of “art district” from our last visit about 25 years ago.  At that point in time, we had little money to spend on art, though we did purchase a few pieces that we cherish – especially a beautiful photograph that hangs in our living room.  We saw a sculpture on that trip – a life size bronze of two deer being pursued by a mountain lion – that we told ourselves we'd try to get if we ever had enough money to consider it.  Well, we do have the wherewithal to do that now, so we were searching for that sculpture or something like it.  Sadly, we were in for a bit of a rude surprise.  First, the raw number of art galleries was far lower than we'd remembered.  Second, the art galleries were dominated by what I call “modern art” – stuff that looks like any idiot could have done it, and that looked to our eye more like junk than art.  There were some exceptions, but few and far between.  And nobody was showing traditional bronze sculpture.

I spoke with some of the galleries' staff about this, and was able to piece together what happened.  Fundamentally, the dot-com recession killed them all off.  Some of the galleries up and moved to more moneyed territory – primarily Boston and New York.  Others simply folded.  The galleries that remained were, for the most part, more marginal in their appeal – as one gallery owner put it to me, the ones who stayed were attracted by the low cost of running a business on the south Maine coast.  She told me candidly that she showed the work of local artists whose work tourists were willing to buy, not the work of artists she enjoyed.  One could almost feel her sorrow.

Our quest for the sculpture was a bust, but there's a happy ending on that story that I will tell another day.  I did find a couple of quite nice turned wooden bowls, made of glued together segments (dozens of them in one case).  The first photo below shows the two bowls, and the following two show details of the fancier one.  Both bowls were made by a local woodturner named Frances Farley.  All the local galleries knew him, liked him, and knew that he had recently died at a ripe old age.  I feel lucky to have stumbled across these. 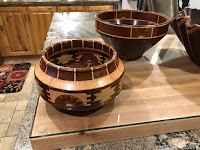 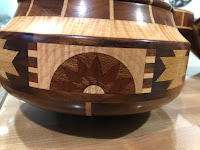 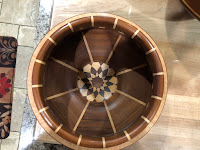 While we were walking around the town of Camden, we happened across a couple roughly ten years older than us who was gawking at the same window we were.  We struck up a conversation, and during that I mentioned the two visits I'd made to Matinicus Island in my youth, one of them involving working on a lobster boat for two weeks.  That's when our new friend let us know that he was a lobsterman, out for the day with his wife!  He worked his lobster pots near the coast of Rockport, a few miles away.  We shared some memories of the old mail boats that were based in Rockport, and which provided our transportation to Matinicus back in those days.  I didn't really expect to see any locals in a town like Camden, but to run into a lobsterman was completely outside expectations.  That was fun!

After we'd finished our shopping, we headed for Belfast – the home of Young's Lobster Pound, the best place on earth to get lobster rolls or live lobsters.  My family knew about Young's Lobster Pound from my earliest memories of Maine, back in the late '50s.  I'm not sure how we first found out about it.  They started shipping lobsters on telephone orders back in the '90s, and ever since when we're in the mood for lobster, that's how we get it.  There was no way I was going to miss the chance to actually eat there!  The photos below were all taken at Young's, but the last one shows the important part: a lobster roll (never mind that it's not a traditional roll) and a bowl of seafood chowder.  Debbie had the identical meal.  Both were brains-fall-out-on-the-table good... 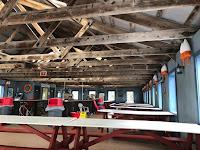 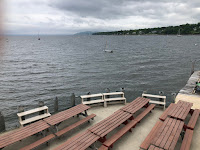 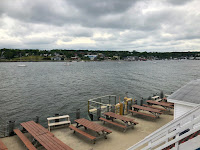 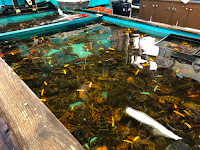 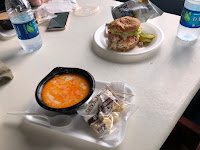 Bellies sated, after this we headed back to our lodging for a good nights sleep before the next day's adventures...
Posted by Unknown at (permalink) 12:13 PM