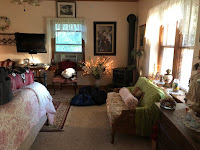 Day 3...  We drove out of Nebraska, across Iowa, and halfway across Illinois today.  We stayed last night at the Westview bed & breakfast, just outside of Lincoln.  It was a delightful place to say – beautiful grounds, a grand view to the west, and a most pleasant room (at right) with a full kitchen. 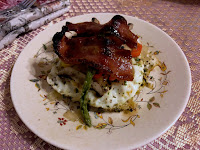 We told Angela, our hostess, that we'd be leaving early in the morning – and she insisted on making us a (delicious!) breakfast and bringing it to our room at 6 am.  Wow!  That's a photo of her concoction at left.  I've no idea what you'd call this thing, but it was really yummy.  A nice way to start off the morning, and as things turned out, this was the only time on the entire trip when we got our breakfast part of the bed & breakfasts we stayed at. 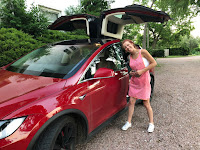 Angela found out we had a Tesla, and she asked us to take her picture with it so she could tease her boyfriend about seeing a Tesla before he could.   That was fun.  :)

We passed miles and miles of beautiful farms on today's drive – gave us a real appreciation of the stunning productivity of America's farmlands.  In Iowa we saw lots of terraced farms.  I don't remember this from the trips across Iowa I made in the '60s and '70s, but that could just be my memory.  In addition to the terracing, we noted an interesting technique for preserving soil – wherever there was a place in a field where water ran off, permanent grasses were planted instead of a crop.  These hold the soil in place and slow the runoff down enough that it will drop any entrained soil.  Combined with the terracing (which reduces runoff in the first place) this appears to be a very effective way to keep soil from running into the rivers.

Iowa had particularly beautiful rest areas on the Interstate, nicely landscaped, well-tended, with interesting displays and art.  Much of the latter was related to soil conservation – apparently a very big topic in Iowa.  At one of these rest stops, as I climbed back into our car, I noticed an (expensive-looking) cell phone lying on the pavement.  After some messing about (the phone was completely unlocked), Debbie (who knows more about Android phones than I do) managed to call the boyfriend of the phone owner.  Turns out he was in the car with the young woman who owned the phone, and they were just a few miles away!  We waited a few minutes for them to return, and then gave the phone back to the very grateful young lady.  We were cell phone heroes!
Posted by Unknown at (permalink) 12:25 PM