Paradise ponders: temperature moderation progress, kitten settling in, and great customer service edition...  Debbie and I took a nice drive up Blacksmith Fork Canyon yesterday.  We spotted several groups of deer, and noted that the bucks are back with their harems.  We also spotted a large herd of elk just north of the Hardware Ranch enclosure – they're coming back for the winter.  It won't be long now before they're all in the enclosure and the kids are taking horse-drawn wagon rides out to see them.

I spent most of yesterday afternoon working on the return for my office temperature moderation project.  I had a question from a reader about how I cut those rectangular holes in the OSB.  The first photo below shows the beginning of such a cutout, in this case through the second-floor floor sheathing.  I started with a 1/2" hole right in the middle.  Then I used a battery-powered skill saw to cut a couple of chunks out, as you see in the first photo below.  This gives me access to make the square cuts, and I ended up with what you see in the second photo.  To put the return in, I had to make four of these rectangular holes: on the inside and outside sheathing of my office wall, on the second-floor floor, and on the first-floor ceiling.  These all had to be in perfect alignment, which meant much careful measuring.  Once the holes were cut, however, the rest was a piece of cake; in the last photo you see the completed return.  Well, almost complete.  Today I'm going to cut some OSB to make covers for the rectangular holes I cut, with a hole for the ducting.  This will let me refill the holes with insulation and button it all up nicely.  Then I really will be done! 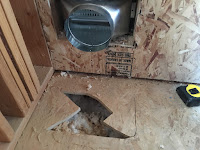 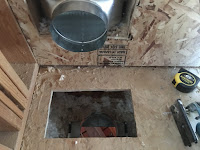 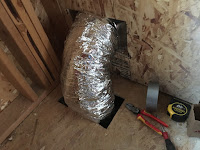 Debbie is working on a name for the new kitten, which she thinks is female (it's surprisingly hard to tell with kittens).  We have an appointment for it at the vet next Tuesday.  Meanwhile it's in one of our isolation cages, with a soft bed, a clean litter box, and an unending supply of food and water.  It looks quite content. :)

I had a great customer service experience last night.  I'd ordered the little camera at right to put in our cattery, so Debbie could watch over the kitties while she was upstairs or away from home.  It didn't work at all out of the box, which of course was very disappointing.  I followed their directions in case of trouble, and fired off an email to their customer support describing my problem.  Then I went to bed.  This morning when I got up, I had a very nice email from Connie – directly reassuring me that if the camera really didn't work they'd send out a new one.  But first, she asked if I could try an alternative microUSB cable.  I did, and that solved the problem.  I let Connie know, and instantly she reimbursed me for the cost of the replacement cable.  Very nice service, and about as easy a problem resolution as I could imagine.  What makes it even more impressive is that the company (Wansview) is in China, as is Connie, and she's Chinese.  Her English was excellent (as so often is not the case), and her service attitude admirable.  Kudos!
Posted by Unknown at (permalink) 6:44 AM