Paradise ponders: first air and fallen kittens edition...  I made good progress on my temperature moderation project yesterday.  The first photo below shows the door (a hatch, really) for the plenum box I finished yesterday, and the next photo shows it installed, with chest latches holding it in place.  The last photo shows the completed plenum box, with the flexible duct leading up to the boot (and on the other side, the grill for first floor air to get into my office).  When I light it off, I can't hear the fan at all – wonderful!  Last night I left the fan going all night with the second-floor heater turned off.  When I checked it out this morning, my office temperature was 64°F, same as my first floor.  That wasn't really much of a test, though, as the coldest it got outside was 55°F!  :)  Tomorrow night it's forecast to get down to 20°F – that will be a real test! 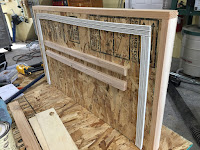 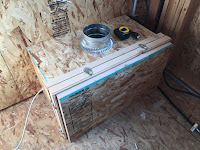 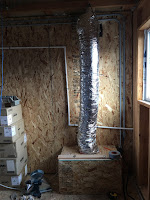 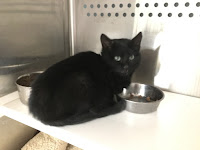 This morning, as I was drinking my morning tea, Debbie called up from the cattery, saying there was something there I needed to see.  That turned out to be a little kitten, to all appearances healthy except for a complete lack of body fat – that little thing was hungry.  Small as it is, it put away two cans of wet cat food in mere seconds.  Debbie found it in the well of one of our basement windows – apparently it wandered over to our house, perhaps attracted to our cats visible in the basement windows, and tumbled down.  You can see in the photo at right just how small it is.  We don't know if it's male or female yet; we're waiting for it to settle down a bit before we handle it too much.  It's already accepting being held and stroked, so I don't think that's going to take long.  It's going to the vet next Tuesday for a checkup, and of course we're hoping it's FeLV negative...
Posted by Unknown at (permalink) 10:05 AM