Paradise ponders: outrageous fees, orange moon, lonely dogs, and hurdling hurricanes...  Watched the video of hurricane Irma at right this morning.  The first thought that came to mind was borne of my days in the Navy: I wouldn't want to be on a ship in the eye of Irma.  You'd be in calm waters, but there would be no escaping that wall of wind.  The second thought that came to mind: how marvelous it is that we can actually see this hurricane, and nearly in real time.  In the '50s and '60s, when I was a young boy, photos or movies of hurricanes were impossible.  We generally only knew approximately where a hurricane was until after it made landfall.  The sort of precise warning we have today was unheard of – we just knew there might be a hurricane coming.  We had no real idea of when or where it might strike, or how powerful it was, until after the fact...

As I walked out to my barn this morning, pre-dawn, I saw a most beautiful sight: a perfect full moon hanging about 10° above the western horizon.  It was orange because the light is filtered through the smoky air, and the shorter wavelengths (the blues) are scattered more readily than the longer (reds).  The smoke particles are fine enough that they don't noticeably interfere with visual resolution, yet they still filter the color.  The smoke is, we think, from wildfires in eastern Idaho and western Montana.  Our winds were from the northwest most of yesterday (and will be again today), blowing the smoke from those distant fires over us.  Yesterday there was enough smoke to irritate our eyes, and to remind us of the scary days in southern California when such smoke meant wildfires within striking range of our homes.  Thankfully that is not the case here – we're safe, though many others not so far away are not... 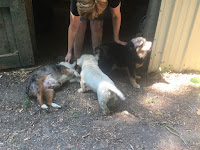 Our friends and neighbors, Tim and Jeannie D., are on a cruise off Alaska right now.  They left on Sunday, and won't be back until next Sunday.  Their three dogs (at right: Debbie with Riley, Lexy, and Marley) are in an outdoor pen with access to the barn.  Abby S., a mutual neighbor, is taking care of their basic needs.  Debbie and I are visiting at least daily, just to give them a little company.  These three spend most of every day with Tim, following him about everywhere he goes.  Being on their own is a new and not particularly happy experience for them.  When we show up, they swarm us, looking for touches and reassurances.  Tim texted me yesterday with an annoyed message: it seems the cruise ship somehow manages to charge him per text received or sent – $3 each!  That is completely unjustifiable gouging.  Normally price gouging doesn't bother me, as it is an efficient way to distribute a scarce resource.  But ... texts are not a scarce resource at all!  The cruise ship is taking advantage of a monopoly it holds, plain and simple.  I already have about 17,000 reasons to never go on a cruise, but this adds yet one more.  I wonder if all the cruise ship lines behave like this, or if it's just a few?  I remember when hotels generally did this sort of thing (with telephone calls), but that's nearly gone now in this age of cell phones...
Posted by Unknown at (permalink) 5:50 AM