Paradise ponders: puppy, math texts, and a war zone in the yard edition...

Paradise ponders: puppy, math texts, and a war zone in the yard edition...  Yesterday afternoon Michelle and A.J. brought the new puppy over for a visit, ostensibly to get training information from Debbie.  The puppy is provisionally named “Samoa” (after the cookie, not the country), or “Sam” for short.  At one point Debbie wanted little Sam out of sight, so I took her into our living room to play with her – and all she wanted to do was to sleep in my lap.  She was all tuckered out. :)  A little later, everybody else came in and we talked for a while, while little Sam looked like this as she moved from person-to-person: 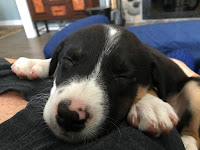 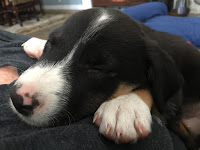 This morning we heard that she had a relatively peaceful night, considering that it was her first night away from the litter, and first night in a crate.  There was one bout of whining, which turned out to be related to a fecal explosion.  After some cleanup and drying, she was down for the rest of the night.  I expect her to be even more tired tonight, as Michelle and her kids will have the entire day with her. :)

Yesterday I had an actual physical book delivered – a fairly rare event for me these days, as nearly all my books are electronic.   This one is a text that I've been looking at for years, and when I got the notice that the second edition was out, I decided to go for it.  My exposure to the math underlying much of computer science has been very spotty, and almost entirely self-taught: the consequence of never going to college, and an education driven by need in my work.  If my enfeebled ancient brain can handle the strain, I'm going to try to work my way through this entire book, then tackle Knuth's classic The Art of Computer Science while armed with this math.  I've used The Art of Computer Science for decades, dipping into it whenever I've needed to learn something I'd never run into before (most recently red-black trees).  I've never tried to work through the entire thing, so consequently there are stretches of hundreds of pages that I've never even glanced at.  I read through the first 25 pages or so last night, and so far as I can tell, no brain injuries occurred – so I shall keep on going.  :)

I haven't mentioned our great sprinkler project for a while.  It's been oh-so-slowly advancing, working our way through one challenge after another.  The most recent challenge was the startling unavailability of good topsoil, the consequence of a building boom here in Cache County.  We finally managed to scrounge up the loads that we needed, with about 300 cubic yards delivered so far, and another 200 or so coming in the next week.  All this dirt is needed to smooth out the low spots in various places in our yard.  There were minor low spots over nearly the entire three acres, but the worst bit is in our back yard (just a half acre or so).  In that area there are big stretches that were almost 18" lower than they should have been, and it takes a lot of dirt to fix a problem like that!  We're also, finally, addressing the edges of our driveway.  When we put it in three years ago, to get the levels right the crew had to raise parts of it 6" to 8" above the yard.  We've now put in dirt to slope the yard nicely up to the edges of the driveway, so you don't have to step off a cliff when walking from the driveway into the yard.  The back yard right now looks a bit like a WWI trench warfare photograph – there are trenches everywhere, and in just about every direction.  Many of them, as I write, have pipes and wires in them.  This morning the contractor is scheduled to arrive and finish them up to the point where we can pressurize the entire sprinkler system – a major milestone indeed!  At that point we can enable the irrigation schedule for the south part of our yard, and perhaps keep our lilacs and white birches alive.  Within a few days we should be able to do the same for the north part of the yard – and the contractors will be ready to lay sod (in the north) and sow seed (in the south).  Assuming this all happens by September first, that means the project will have taken 13 months with this contractor, and 29 months from the first contact I made with the first contractor (who never actually started the job, though he came out, surveyed, and made an elaborate plan).  Somehow I never expected the #@(#)*)$@#^^@#!)#(*^% sprinkler project to be the most difficult one to accomplish of all the things we've done to our new house!
Posted by Unknown at (permalink) 6:51 AM