Paradise ponders: return to Paradise edition...  Well, we had quite the busy few days! 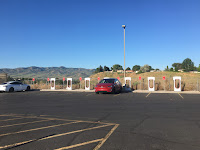 Early on Wednesday morning, as planned, we set off on our trip to Kalispell, Montana to pick up metal work completed for us by Lazy K Wrought Iron.  To get to our lodgings in Whitefish, Montana, we had to drive about 700 miles.  With a nominal range of 285 miles per battery charge, that's obviously going to require some recharging along the way.  What may not be quite so obvious is that we wouldn't actually get that much range from the battery, as we were moving along (most of the time) at 80 to 85 MPH, and we had lots of elevation change to contend with.  In actual practice, we got around 210 to 220 miles per full charge – but we rarely had a fully charged battery.  Why?  Because the supercharging stations (like the Pocatello, Idaho station at right) aren't located in precisely the right place to let us do that (they're closer together), so we don't actually have to fully charge the battery to get from one station to another.  On the way up, we stopped to recharge in Pocatello, Idaho Falls, Lima, Butte, and Missoula.  On the way back, we managed to skip Pocatello.  Typically we were in the supercharger for 20 to 30 minutes.  As with our first trip to Kalispell, we actually found these stops to be pleasant breaks and not a hassle at all.

Our trip up was uneventful, but full of beautiful scenery.  Our favorite bit was the trip around the western side of Flathead Lake, in Montana.  Debbie snapped a few photos of that area as we zoomed by: 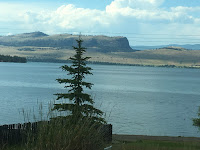 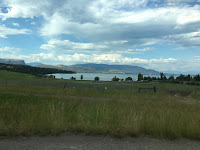 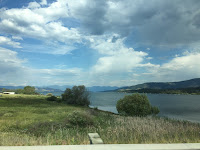 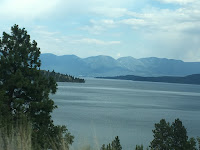 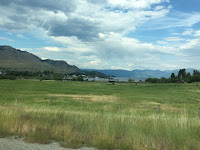 We pulled into our lodgings around 6:30 pm, tossed our luggage into the room, and immediately headed for the Tupelo Grille for dinner.  We'd discovered this place on our February trip, and enjoyed it so much that we didn't even peruse the other restaurants in town.  We had shrimp and crawfish cakes for our appetizer (first photo).  Debbie had the halibut special (center photo) and I had chicken and dumplings (last photo).  That was a very strange chicken and dumplings, but it sure was delicious!  Debbie's halibut was perfectly grilled, with a crust of herbs that we couldn't identify, but thoroughly approved of. 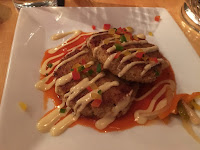 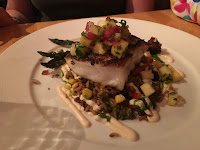 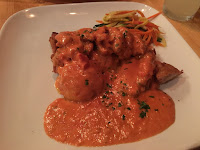 Our “room” at the lodge was a one-bedroom suite, with a full kitchen, a laundry, a dining room, a living room, a huge bathroom, and the bedroom.  It must have been 800 or so square feet all together; it felt like being in a large apartment.  The first photo shows the view from our balcony; second photo is roughly the same view at sunset. 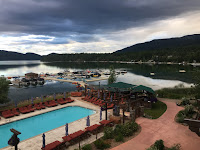 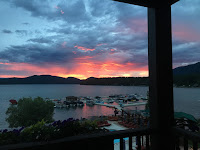 In the morning we stopped at the Buffalo Cafe for breakfast.  That meal was, unfortunately, less than memorable.  Then we headed for the Going-to-the-Sun Road in Glacier National Park.  This is a place I've been to several times, though the most recent time was over 40 years ago.  Debbie had never been there.  I got a bit of a shock as we approached the park's entrance: there was a traffic jam waiting to get in – it took us 25 minutes just to get through the gate.  The amount of traffic in the park was difficult for me to absorb, and so vastly different than my memories of the place.  Several locals told me that my memories were completely correct – Glacier National Park was “discovered” in the late '80s and early '90s, and the number of people visiting has skyrocketed.  One consequence of this is a dearth of wildlife anywhere near the roads – we saw just two deer, one pika, and a couple of half-dead squirrels.  The scenery, though, was even better than in my memories – especially the waterfalls.  I didn't remember the dozens and dozens of huge waterfalls, nearly everywhere you look.  Some photos from our trip through the park: 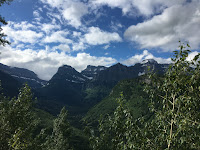 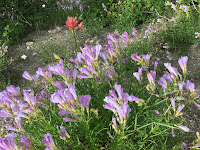 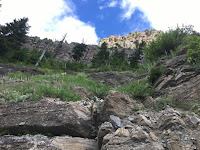 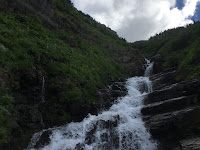 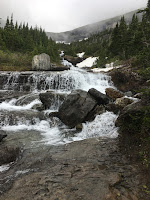 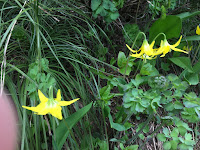 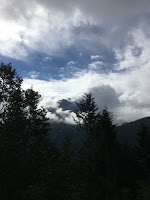 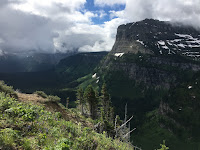 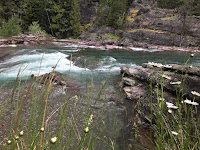 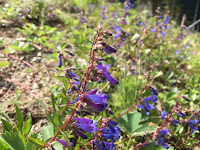 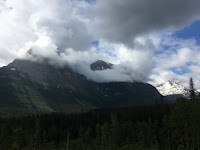 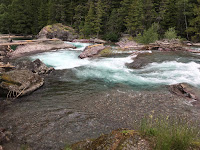 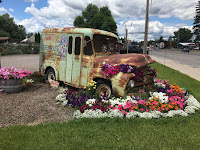 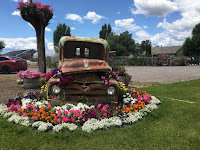 On the way back into Kalispell (to pick up our metal work), we passed by a little retail nursery called Angie's Greenhouse.  The old jalopy decorated with flowers caught our eye, and we stopped to walk through it.  They have a huge selection of color plants, mostly annuals, along with hundreds of different lawn ornaments nearly all of which are made from rusty sheet metal (sometimes painted).  It's well worth a walk-through if you happen to be in the area...

Our last stop for the day was Lazy K Wrought Iron.  We expected to pick up our stuff at their workshop, but wanted to see the retail store that we'd missed on our last trip.  So we first went to downtown Kalispell to the retail store, which when we walked in was staffed by two of the Lipka kids with huge smiles.  A few minutes later, Abigail (their mom) walked in, and we discovered that all our stuff was right there, in the retail store – except for the filling station door, which they'd left at the power coating place to minimize the chance of damaging it.  So we hopped in the car and made a quick trip about four miles south, picked up the door (which fit nicely in the back of the Model X!), and then zipped back up to the retail store.  There, a parade of Lipkas helped us load the car with the 31 large pieces of metal they'd built for us, along with dozens of bolts and lag screws they'd had powder-coated to match what they'd built.  We even had a passer-by stop to help with one particularly awkward piece.  Abigail gave me some paracord and I lashed the whole pile down.  There was a lot of metal in the back, nearly filling the available space in the Model X.  We really couldn't have carried much more!

After departing the store, we headed back to the Tupelo Grille for another fine meal.  We had mussels for an appetizer, and I forgot to take a photo of them.  The menu had a mussel appetizer listed, but it included harissa, a sauce that's too danged hot for me.  We asked the waiter if the kitchen could leave that out, and he came back with a counter-proposal: the chef would whip up something easy for us, with a white wine sauce.  It was wonderful.  I'd give a lot to be able to “whip up” something like that! :)  Debbie's entree was trout stuffed with shrimp and crawfish, mine was elk meatloaf.  We ended up splitting the entrees half-and-half; both were superb.  The mashed potatoes that came with the elk meatloaf were the best I've had in years, just the way I like them (lumpy, buttery, herbed). 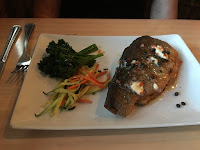 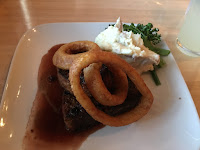 Friday morning we departed early, grabbed some coffee from Cowgirl Coffee (for a very necessary infusion of caffeine) just down the street from our lodging, and then we were on the way home.  Despite all the weight in the back of the Model X, there was only a slightly difference in its handling and no measurable difference in its mileage.  I guess most of the energy needed to drive at freeway speeds really is needed to overcome drag (which the extra weight doesn't affect) and not in elevation change or acceleration.  Of course the regenerative braking helps reduce the energy needed for the latter two reasons, too.  The drive home was uneventful except for a couple of crazy drivers that scared us.  The load in back never rattled or shifted at all.  We got home, quite tired, around 7:30 pm...

Saturday morning, after spending some time with the dogs, I went to work unloading the car.  The two lousy photos below will give you a flavor for how much stuff we had packed in there: a total of seven layers of metal parts, all packed carefully in blankets and foam sheets.  It took me almost two hours to get it all out and put away.  There was no damage to anything, which was very nice to see.  We did have one problem, though: the railing they'd built for our sun room stairs doesn't fit. :(  The Lipkas are already all over that, insisting on making a new one for us at their expense, even though it seems to me we share equal blame.  We'll have to find a way to get even with them for that! :) 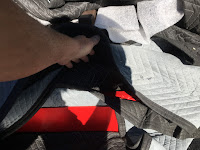 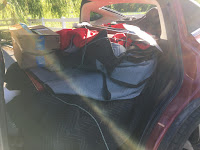 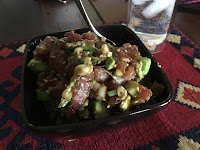 Yesterday morning we went grocery shopping, and picked up a couple beautiful chunks of big-eye tuna.  Debbie made some avocado poke (using a recipe from the grocery store) with it, and it was just wonderful.  She served it over steamed brown rice.  Took both of us right back to Hawai'i.  We'll definitely be doing that again!
Posted by Unknown at (permalink) 9:23 AM