Paradise ponders: snow and marbles edition...  When I woke up this morning and looked out my window, here's what I saw: 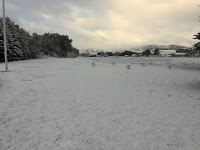 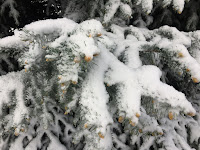 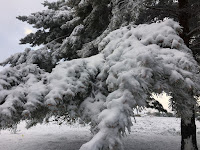 Yup, that's right.  A winter wonderland.  The dogs were quite enthused about this!  I was ... less so.  At least the asphalt in our driveway stayed warm enough to melt the white stuff.  If this global warming warms things up any more, we'll be frozen solid!  Almost every day in these part we're breaking 100 year records for cold and wet – exactly the opposite of what those infallible climate models predicted we'd see in this decade.  Sheesh... 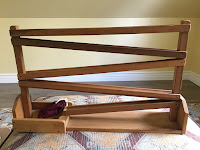 When my father was a toddler, in the late 1920s, he had a favorite toy: a set of wooden ramps down which marbles would roll.  I didn't know that in the late 1950s when I played with this same toy at his parents' (my grandparents') house.  I remember thinking it was a big, heavy thing – when my grandmother sent me to the closet she kept it in so I could get it out and play with it.  It seems small and light to me now. :)  I also remember the marbles as great big taws (shooters), but actually they're just ducks.  It's made very simply, and not particularly well-finished, though in my memory it was a finely crafted and polished wood.  No matter, the memories are the important part.  It is made of a fine-grained hardwood (maple at a guess).

I found out that it was my dad's toy on one of our many trips together.  It was during a far-ranging conversation about his life before WWII, the same conversation in which I learned that his pre-war career plan was to become a chicken farmer.  In another part of that conversation, he was telling me what it was like to have grown up in the Great Depression.  At the time of the stock market crash, he was just five years old.  This toy was one of the few that he had at that time, and there was no money for other toys until he was too old to want them any more.  Most of the toys he remembered were things that his father clapped together, or that he made do with.  Hoops from a broken basket and a nice stick, for instance, made one of his favorites.  But this toy, the marble ramps, was one that he especially cherished because it was one of the few “real” toys he ever had – and it was a gift for him, from his parents, not a hand-me-down from his two older brothers.

I have very few artifacts that belonged to my father, other than documents and photos.  This is the only one I have from his childhood.  I shall cherish it...
Posted by Unknown at (permalink) 1:03 PM