Paradise ponders: giant redwood boxes, ancient eyeballs, errant puppies, and bloody confusion edition...  Well, we had quite a confused and stressful day yesterday.  Despite that, I managed to finish my giant redwood “box”, and I'm very pleased with how it came out.

The first step yesterday was to route a large groove on the inside of each of the pin boards and tail boards.  This groove would accept the “bottom” I made earlier from tongue-and-groove redwood 2x8s.  The groove needed to be 1.5" across and 0.55" deep.  In the first photo below, you can see my jig on the router table to make the groove in the tail boards (the short sides).  I fixed the fence so that the edge of the router bit toward me was 2.5" from the fence.  Then I clamped a long board very carefully so that there was exactly the width of the tail board plus 3/4" between it and the fence.  I'm using a 3/4" straight bit, so being able to move the tail board in-and-out 3/4" means I could cut a 1.5" wide groove.  Then I clamped a couple of “stopper boards” to the long board, in the right place so that the groove would be cut in all but the last 3/4" of each side of the tail board (so the groove would be “blind” - not visible from outside the box).  Finally, I raised the bit to exactly 0.55" high.  I'd never done anything like this before, so I spent considerable time triple-checking everything I did before I started removing wood.  Once I was happy with it, I lit off the router and carefully lowered a tailboard onto the bit.  After that I just moved the board around to route out everything within range of the stops I'd set up with the boards.  It was harder than I expected to move that board around, as the vacuum created by the dust collection system tried very hard to keep the board in one place. :)  When I stopped the router and pulled the tail board out, I miked the groove – and it was exactly right.  Amazing how well measuring works! 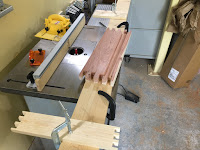 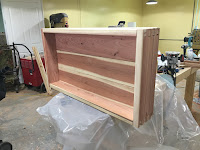 After cutting the grooves in all four sides (I had to move the stopper boards to do the pin boards), I was ready for a trial fit (right hand photo above).  This went very well.  The only real problem was that the two pin boards (the longer sides) and bowed slightly along their long axis, but I figured I could take that out in clamps.  And that's what you see in the first photo below – after slopping glue on as fast as I could, I assembled it all just as in the trial fit, and then clamped the crap out of it.  Twelve clamps later, all the bowing had been taken out, and I had a good fit all the way around.  This morning I took it out of the clamps, spent a couple of minutes with my belt sander smoothing out the finger joints, and voila! – my jig “elevator” is complete.  The last photo shows it all set up and ready to use, clamped to my bench and with the dovetail jig clamped on top.  Now I can easily handle the long boards I need for my next project, which I'll be starting today: cedar frames for the basement windows that are opened to the sun room. 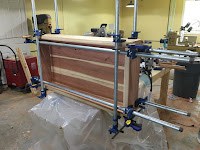 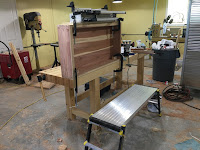 When I was a much younger man, I was a co-founder of a business that made and marketed practice management software to optometrists and ophthalmologists.  As you can likely imagine, I met some interesting people during those eight years, people who knew an awful lot about human vision.  Some of them had instruments to measure all sorts of things about vision, and I had the opportunity to have my eyeballs measured in ways that most people never do.  I discovered several things about my eyes that I'd not previously known:
Now at the same time I'm myopic (near-sighted) and I have moderately bad astigmatism.  That means I'm dependent on corrective lenses (eyeglasses for me) to get clear vision.  I've been wearing glasses since I was a wee lad; this is not at new phenomenon. :)  Now that I'm approaching being ancient (I'm almost 65), I've developed presbyopia (which nearly everyone does, eventually).  That means my eyes can't “accommodate” to focus at various distances like they used to be able to.  Consequently I've been wearing progressive lenses (“no-line bifocals”) for 15 years or so.  Presbyopia generally gets continually worse as you age, and mine has followed that pattern.  In the last few years it's gotten to the point where even with my progressive lenses I have difficulty with computer screens.  I work with my screens about 30" from my face, which is right in the middle of the transition between near and far vision on the progressive lenses.  At that point the field of clear vision is at it's narrowest.  The two screens I normally use occupy about a 90° field of view, so what I really need is the widest possible clear vision, not the narrowest.

So I finally caved in and bought myself a pair of single vision (that is, no bifocal) glasses with the prescription set for vision at about 30".  To get that prescription, I took the near “add” my eye doctor measured and halved it, which is approximately right.  I ordered the glasses from Zinni Optical (a Chinese company) on the advice of a friend who'd tried them and was happy with the results.  For $50 I got a pair of titanium frames with wide rectangular lenses, perfect for my application.  Yesterday I received them, and today I'm using them – and they are great.  They weigh next-to-nothing, the lenses work wonderfully, and I have relaxed, clear vision at my computer for the first time in a couple of years.  I wish I'd done this a long time ago...

The thing that stressed us the most yesterday was that both of our puppies (Cabo and Mako) escaped our back yard and disappeared from view.  This is our nightmare scenario: two incredibly athletic little puppies with absolutely no experience of the big bad world, out there somewhere on their own.  What happened is a construction worker left one of our gates open, and when I let the puppies out they discovered that very quickly.  We figured out that they were gone about 60 seconds after I let them out, but still in a walk around the house we could see nothing – nor did they respond to our agonized and frantic calls.  I got on my ATV and started driving around to places where I knew they had shown prior interest, but they weren't anywhere in sight.  Debbie called from our doorways.  Nothing.  Despondent, we were.

Then, a small miracle.  I spotted one of the puppies about a quarter mile away, running down a back road.  I hopped back on the ATV and intercepted him – it was Mako.  He came right to me; I leashed him and brought him home.  I called for Cabo, too, hoping she'd be nearby, but nothing.  After dropping off Mako I headed back out on a broader circuit of the general area where Mako was.  After a couple minutes of fruitless searching, Debbie called with wonderful news: Cabo had come to her as she called from our garage.

Bullet dodged.  Nightmare ended.  But our equanimity wasn't restored for quite some time...  This morning Debbie had a great idea: to get signs for all five of our gates, asking people to keep them shut.  That worker had no idea we had dogs in the back yard, so one can hardly blame him for not knowing that he should close it.  Furthermore, keeping dogs in a fenced yard is ... slightly unusual in these parts.  Most dogs run free, despite the risk to them from cars on roads – nearly incomprehensible to us, but nevertheless true.

Debbie was due to get blood drawn yesterday for some routine tests.  We drove the 12 miles up to the hospital lab around noon, only to find that the lab had no “orders” for blood work on her.  Argh!  We tried calling her doctor's office to get those orders re-transmitted (for we were certain that had already been done), but nobody was answering and we didn't get a call back after waiting a bit.  So back home we went.  Later, the doctor's office called us back, verified that the orders had already been sent, but they went ahead and re-transmitted them anyway.  Shortly later, the lab called us to let us know that they'd found the order – but it was the wrong one (an older “standing” order for quarterly checks).  Sheesh.  So we drove up to the hospital again, just after finding Mako and Cabo, and now we'd found that they had both orders.  Finally, they drew blood and got the tests underway...

So of course we had an ice cream cone at Aggie's Creamery. :)  Yummy, they were!
Posted by Unknown at (permalink) 9:17 AM