Paradise ponders: antennas, voles, and seromas edition...  Today I continued working on my antenna project.  The antenna on our house is completely installed except for aiming (which I can't do until both antennas are up) and painting (which I can't do until I've aimed it).  Fishing the cable through the wall of Debbie's office was a two-person job, and Debbie has recovered enough that she could lay down on the floor and do the indoor part of it while I crawled out on the roof to do the outdoor part.  Progress!  The antenna is wired up to its POE injector, ready for connection to the new routers I've ordered; it's management WiFi network is on the air.  I also started on the barn antenna, but around 4 pm today I just sort of conked out.  Lack of sleep last night caught up with me, I think...

It was such a gorgeous day this morning that I decided to go for a walk, taking Cabo with me.  The skies over our heads were perfectly clear, but there were puffy clouds over the mountains to both the east and west of us.  With snow on the peaks and the valleys a beautiful green, flowers popping out, and all our summer animals and birds back, it was a real treat for me.  I took Cabo along for the walk, and she had herself a grand adventure.  On one of her forays into the tall alfalfa (like in the first photo), she caught the scent of a vole – and then flushed it.  That triggered an instinctive reaction to pounce on it, which she did – and she caught it.  She raised her head, with her jaws holding a struggling vole, and then calmly crunched it, killing it.  Then she dropped it and looked at me as if to say “Now what do I do with this?”  She showed no inclination to eat it, which is what Mo'i or Race would have done before I got a word out.  But she definitely wanted to find more voles – for the entire remainder of our walk, searching for voles is all she wanted to do! 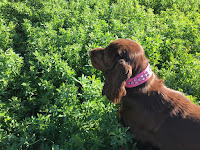 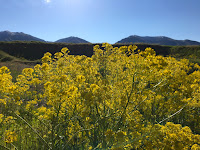 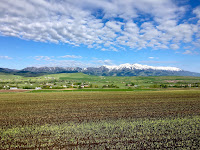 The second photo is of a stand of mustard, backlit by the morning sun, with some dew still on it.  Even mustard can be pretty! :)  The last photo is the distance view to my west as we were walking.  Pretty as a postcard, isn't it?

We took Cabo to the vet yesterday so the vet could take a look at a seroma that we'd noticed at the site of her spaying incision.  The vet (Dr. Watkins) was quite surprised – said he doesn't often see a seroma on a simple spay, and he was worried that it might mean the incision on the body wall (not the skin) had herniated.  He palpated it and found nothing suspicious, then took multiple X-rays and also saw nothing.  These seromas do occasionally happen for unknown reasons, they're not dangerous, and generally they go away on their own as the body reabsorbs the fluids.  So he just drained the fluid that had already accumulated (about 20cc, or a tenth of a cup), gave her a shot of antibiotics, just as a precaution, and sent us home.  We're to watch for further accumulation and bring her in for draining as required, but otherwise we're just waiting for it to go away on its own.  The vet wouldn't accept any payment for any of the work he did yesterday, saying it's part and parcel of the spay.  A nice gesture, that was.  We'd have happily paid for it, because (so far as we know) it wasn't the vet's fault that Cabo got a seroma.  But to have such great service, delivered as if we were close friends, and then say it's free – well, that can't help but put a smile on our faces...
Posted by Unknown at (permalink) 3:26 PM