Paradise ponders: 99 year old generator plant edition...  Yesterday evening we had our celebratory dinner at Le Nonne's – a shared caprese for an appetizer, then I had chicken-and-ricotta ravioli in marinara, and Debbie had a pork chop special (three boneless chops with a lovely sauce that had butter, garlic, rosemary, lemon, and some other things we couldn't identify).  That was a very yummy meal, every bit of it.  We left nothing behind. :) 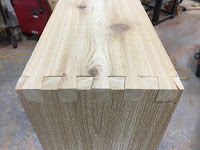 Earlier in the day, in between what felt like five dozen interruptions, I managed to cut the cedar boards and route the dovetails for one of the two frames I'm making for the basement cattery windows that open into our sun room.  To do that, I used the elevated dovetail jig that I finished preparing yesterday.  I did a trial fit of the boards, without glue, and they all fit snugly.  It looks like I had the router just a tad (maybe 1/50th inch) too high when routing the pin boards, but for this application (where the exterior joints won't be visible), that's not an issue at all – just something to remember for the next time I do it.  The snugness was good enough that I could carry the trial-fitted frame over to our house to test its fit into the window – and it was perfect.  I had measured the boards with the goal of 1/8" free space around the frame, to allow for some glue – and that's exactly what I have.  Yay!  Today I'll be cutting and routing the second frame and applying a light gray stain...

After our dinner last night we stopped at the Hyrum generating plant, six miles east of town up Blacksmith Fork Canyon.  We've driven past the generating plant many times, but last night they had the generator down for maintenance and they held an open house for curious locals.  Perfect for me!

When we arrived, we saw that there was a relatively small line outside – perhaps 20 people (mostly kids!).  We could also see that the inside was crowded and appeared to be on multiple levels.  All of this would be challenging for Debbie at the moment, so she decided to wait in the car while I took the little tour.  I waited outside with a happy, friendly crowd of locals for about 20 minutes and then the group inside came pouring out.  Among them were some people we know: Lizzie H., her husband, and her little brother A.J.  Lizzie's the daughter of our friend Michelle H., and she's pregnant with Michelle's first grandchild.  Lizzie told me, very excitedly, that they found out her baby is a girl. :)

The power plant was built in 1918, so it's 99 years old this year.  Walking inside this plant was like going back in time.  What's most amazing to me is that this generator is still in use after all this time!  It's owned by Hyrum city, and operated as a co-op.  When running, it produces 500kw, about 1/40th of the entire city's power consumption.  Mostly it provides power for all the municipal buildings, thereby saving the city's citizens the expense of the electrical power bill.  Yesterday was the first day it's been down for maintenance since we moved here three years ago, and I forced myself to stay up late (past 7:30 pm!) to go see it.

For the geeks, here's a brief explanation of what you're seeing in my photos below (in order): 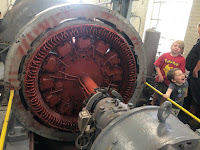 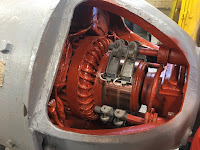 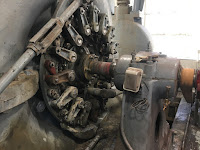 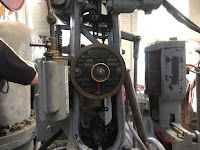 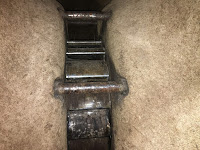 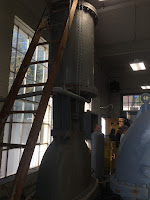 In a little while I'm taking poor little Cabo to our vet.  Today is the day she gets spayed.  We can't give her any food or water this morning, so she's crated and whining piteously for her normal morning routine of deep drinking, bananas, and her morning kibble.  She's very confused, as this is the first day of her entire life when all three elements are missing...

Later this morning we're scheduled to have a new Internet connection installed.  While Clinton (the second tech to come visit us, to repair our intermittent connection) was here, he very casually mentioned that he believed gigabit Internet was now available in our area and being quietly rolled out.  I was skeptical, as we're pretty far out in the country, but on Monday I called Comcast to find out.  Lo and behold, it is available here!  Amazing!  The advertised speeds are 1000 mbps download and 35 mbps upload, both rather large improvements over our already good 230 mbps download and 12 mbps upload.  I ordered it, and it will be installed today.  That got me moving on another networking improvement I've been noodling about.  Two and a half years ago, when we built our barn, I put Ethernet in the ground between the house and the barn so I'd have Internet access in my barn loft office.  Because the barn and the house are on separate electrical systems, I had to install an isolater in that connection – and those are only available at speeds up to 100 mbps (at a reasonable price).  So I've been limited to that speed in my office.  With gigabit Internet to the house, that now looks crippling. :)  So I ordered a pair of Mimosa Networks radio backhaul links.  They'll give me an over-the-air link that can move 1,400 mbps, so I should be able to take full advantage of our gigabit Internet even in my office.  That pair of radio links is about half the cost of a gigabit isolater, which gets me to pondering about what a crazy world we live in these days.  Radio links cheaper than wired links – who knew?
Posted by Unknown at (permalink) 6:37 AM