Paradise ponders, walks and drives edition...  Yesterday afternoon I took Mako (our giant field spaniel puppy) for a walk up my usual route, 1.5 miles round trip.  It was an absolutely gorgeous day, as you can see in the photos below.  Spring is springing, and green is popping out all over.  I tied Mako to a fence post to take these photos, and as you can see in the first photo he had himself all wrapped up within seconds! 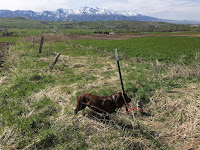 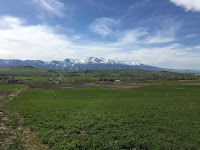 Mako had an adventure on this walk that neither of us expected.  He behaves a lot like Mo'i used to, snuffling along through the grasses in search of something he can eat (a vole or mouse, perhaps).  Yesterday he came across a hole about 8" in diameter, hidden in the grass.  Before I knew what was happening, he had his head in it right down to his shoulders.  A second or so later he came flying backwards out of the hole, followed quickly by a spittin' mad groundhog.  That old ground hog charged Mako fearlessly, and looked damned effective with his teeth and claws.  Mako tumbled backwards and out of range, then promptly pooped. :)  When we continued our walk, he gave that groundhog hole very wide berth!

I saw two other interesting animals on our walk: a white-tailed kite and a very grey red fox.  Those kites are beautiful birds that were quite common where we used to live in California.  This is the first one I've seen here.  It hovered for five minutes or so in a few locations nearly straight overhead, so I had some excellent viewing.  The fox we've seen before; apparently these fields are well within its territory.  Cover is scarce right now, with the alfalfa just barely emerging, so the chances of spotting the fox now are much higher.  Mako never saw either animal. :)

When I got back from the walk, Debbie and I took a drive out toward Hardware Ranch, and then a few miles up Ant Flats Road.  We took the Tesla, and the bumpy Ant Flats Road was a challenge for her because of the pain in her knee's incision.  We probably won't do that again for a few weeks, until she's feeling better.  But ... we did see some animals, especially birds: a golden eagle, Sandhill cranes, blue herons, a pheasant, and lots of deer.  The right-hand fork of Blacksmith Fork River was running at around 8x normal volume, so the waterfalls along the way were really pretty (photos below). 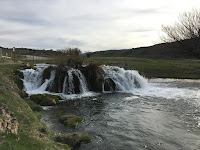 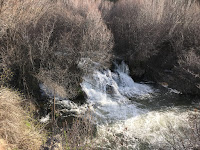 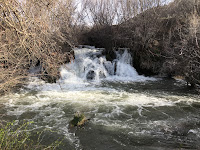 The first photo is of a man-made water feature in the front yard of the cabin on Miller's Ranch.  They get to look at this out their windows.  The other photos are two angles of the same natural falls, just a mile or so from Hardware Ranch along Ant Flats Road.  We've been by this dozens of times, so we're very familiar with its normal flow – a small fraction of what you see here.
Posted by Unknown at (permalink) 7:52 AM