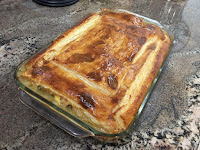 Chicken pot pie...  This was our Easter dinner, mostly made by me but with a spicing assist from Debbie.  We've made this recipe several times before, and we've experimented with some modifications.  This time we added mushrooms and celery, used rotisserie chicken (from Macey's) instead of sauteed chicken, fresh carrots instead of frozen, and frozen peas and corn instead of mixed veggies.  We kept throwing everything that sounded good to us into the pot. :)  Then Debbie got going on the spices, and as far as I could tell she dumped about 30 kinds of spices into the mix, all in enormous quantities.  I have no idea what they were.  Seriously.  So the chance of accurate replication is pretty small.

These deviations from the recipe had another result as well: we ended up with twice as much filling as we were supposed to.  I ended up vacuum-bagging (for freezing) half the filling, and baking the rest with the puff pastry top.  When it was done, we tucked into it with enthusiasm and managed to put away about 1/3 of that pan.  Debbie actually had more than I did!  I took about half the rest and put it in a refrigerator container.  The remainder is now in two more vacuum-bags, waiting to cool down before I vacuum them and toss them in the freezer.  We have much (yummy!) chicken pot pie in our future!

While I was cooking this, I had to add quite a bit of broth and cream to get enough liquid (because we added so much good stuff).  The sauce is thickened with a roux, and I hadn't changed that from the recipe.  That meant the sauce was way too thin, so I whipped up some more butter-and-flour roux in a little frying pan.  That worked great – when I threw that roux in, the sauce thickened right up.  I like the flavor and texture of a roux way better than cornstarch, so I was glad I did it that way...
Posted by Unknown at (permalink) 2:36 PM