Paradise ponders, redwood “flour” and raging river edition...  Yesterday I sanded the rest of one side of the largest redwood slab I made (44" x 38").  While I was doing that, I noticed a flaw that had escaped my attention before: about two inches of one joint, at the end, was not tight.  There was a narrow gap, around 1/64" wide at most, that ran from top to bottom.  Functionally this is harmless, and I was going to just ignore it until I had a brainstorm.  The sanding produced a cup or so of extremely fine sanding dust that is actually tiny particles of redwood (first photo below) with the consistency of white flour.  What if I mixed some glue with a bit of this “flour” and then squished it into the crack with a putty knife?  I'd done similar things with sawdust in the past, but that's far too coarse for this little crack.  So I tried it (second photo) and then this morning I sanded it off (third photo).  It worked perfectly!  Then I googled it to see if I'd thought of something new, and of course I got about 25,000 hits on “sanding dust glue” – and the first few I looked at were describing exactly this, right down to the putty knife.  :)  There really isn't anything new under the sun!  It's a great little trick, though, even if I wasn't the first to come up with it... 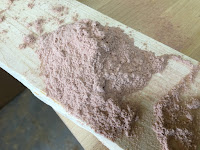 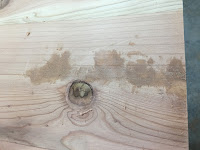 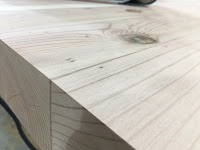 Debbie and I just got back from a jaunt up the Blacksmith Fork Canyon to Hardware Ranch.  We saw quite a bit of wildlife, including deer, elk, a mink, blue herons, kingfishers, red-winged blackbirds, and bald eagles.  The first three birds returned this past week, as we haven't seen them all winter until today.

But the main event of our little drive this morning was the Blacksmith Fork River itself: it is very high.  There is some minor flooding in a few places, but for most of it's length it's less than a foot below the banks – meaning it's a couple feet above normal levels.  Instead of a clear, sparkling stream we have an angry, muddy stream full of debris.  This is happening because of the well-above-average precipitation we had this winter, which in the mountains was mainly in the form of snow.  That snow is now in the process of melting, and the streams are carrying it off.  Our reservoirs have been partially emptied in anticipation of this, so that these high (possibly flood) level waters can be safely captured.  There's considerable worry, though, that the reservoirs will be unable to capture all the runoff this year.  If that happens, there will be flooding below all the dams – flooding that hasn't been seen here for decades.

The first photo below shows a rickety little footbridge that we're very familiar with.  Normally it is two to three feet above the river.  Not so much right now – we're not sure that bridge will survive the spring.  The second photo is the view from that bridge, looking upstream.  Normally the river is only around 10 feet wide at this point.  It's about triple that right now... 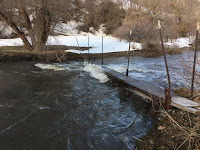 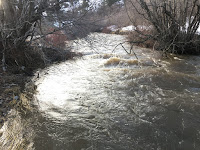 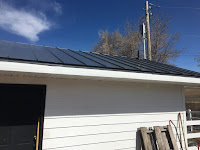 And in response to a reader's complaint, the photo at right is the outbuilding that's being re-roofed right now.  I took this photo strategically, so that it would only show the complete sections. :)  On Monday the rest of the fascia and soffit should be installed, and they'll begin on the rain gutters.
Posted by Unknown at (permalink) 9:24 AM