Paradise ponders, dancing with jigs edition...  Our Tesla Model X is still at the service center, but I did get some news on it yesterday.  The technicians there tracked the problem down to a corroded “hinge” that lets the spoiler move up and down.  It's not at all clear to me how a hinge would be used to move the spoiler up-and-down on its mounting posts, but that's what they told me.  There's a new hinge on order that should come in today.  The techs told me that some other Model Xs have been having the same issue, so engineering is tracking it and looking for a long-term solution.  It was refreshing to have such a frank and open discussion with a car manufacturer's representatives; that attitude is much appreciated by me.  We're hoping to be able to return the #%(*#($ Mercedes CLA 250 today and pick up our Model X.  We may have to take it back in at some later date for the long-term fix, but that's ok.  We knew we were getting a version 1.0 when we pre-ordered it. :)

I did manage to get a little time in on my stairs project yesterday, and I hope I'll get some more today.  I'm putting three dowels down the centerline of each 4x4 butt joint I'm making, and to get the holes precisely positioned in the opposing faces I needed a drill jig.  That's what I built yesterday, from some scrap white pine 1x6 and a 2x4.  The first photo shows the guide I rigged with clamps in order to route a groove in the 2x4 to insert the 1x6.  The second photo shows the result.  The third photo shows the 2x4s being glued to the 1x6, and the last photo the end result.  This morning I'll drill the three template holes in the 1x6, and then the jig is done.  I didn't really dance with it, though. :) 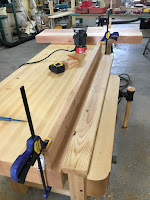 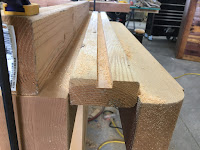 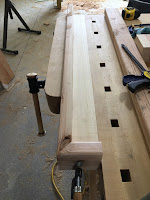 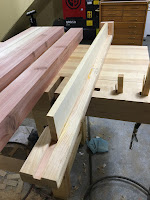 This exercise made me think of the day, many years ago, when it dawned on me that clamps were pretty much the center of any woodworker's universe.  When I thought of a wood shop, I, like most people, thought of tools like saws, planes, hammers, etc.  But now I think I could best tell you if someone was a woodworker by looking for the clamps in their shop.  :)  I own 28 clamps (I counted yesterday) of five distinct types, and I have 8 more arriving today (pipe clamps, for the sixth type).  This isn't nearly enough; I'm pretty sure I need at least twice as many, both in number and in type.  I also need a rack to store them all, as right now I just keep them in a messy pile.
Posted by Unknown at (permalink) 4:25 AM