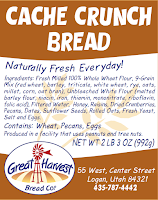 Habits and conventions...  This morning I had my usual tea and toast (Cache Crunch!) for breakfast.  To get the bread out, I had to untwist the “twist-em” closure on the loaf's bag – and for the ten-millionth time, someone (presumably named Debbie :) had twisted it on “backwards”.  I'd expected to twist it counter-clockwise to remove it, but instead that just wound it up some more.  With the twist-em closures, you can't really discern the direction of twist by inspection, you just have to try it to figure it out.  For me, it was disconcerting to discover that the closure was twisted that way – but I find it that way so often – roughly half the time – (including straight from the bakery) that it must be me that's weird. So that got me to thinking about why I thought twisting clockwise to close the bag was the “right” way to do it.  I believe it must be derived from learning how to tighten and loosen bolts, screws, and pipes.  Except in the unusual case of “left-handed” threads, all of these everyday items tighten (screw in) when twisted clockwise, and loosen (screw out) when twisted counter-clockwise.  I've done so much work with such devices over the years that the directionality of them is now at the subconscious level.  When I do run into one with left-handed threads, it's disconcerting in precisely the same manner as that backwards twist-em.  But then, thinking about that, I remembered that I've known quite a few people for whom this directionality was not so clear.  Many of these people are women who have not (for reasons I'll let you speculate about) done much work with bolts, screws, and pipes.

Others, though, have life experiences more akin to mine.  Just to make one example: I have a neighbor who is older than I am, and has spent his entire working life around machinery.  While fixing an irrigation pipe last summer, he ran into trouble that he thought was caused by his arthritis interfering with his finger strength – he was unable to remove a 6" long nipple.  He called me over to help him out.  The pipe unscrewed easily, and when my neighbor saw me do it, he immediately started making fun of himself – because he'd been trying to tighten it!  Fifty years of field experience with machinery, and he still didn't have the directionality of threads down pat.  In fact, I discovered, he relied on a little jingle (“righty tighty, lefty loosy”) to jog his memory, but somehow he'd messed that up.  He told me that he's always had trouble remembering the direction to turn bolts, etc.  He's even marked his tools with arrows to help him remember.

Thinking about this apparent dichotomy (people who can or can't easily remember thread directions) got me to wondering if it might be related to dyslexia.  A little googling quickly eliminated that hypothesis: dyslexia is strictly related to words (as you can see from the word's roots!), and doesn't affect any other abilities so far as I can tell from the studies I scanned.  I learned thread directions so long ago that I can't recall at all whether it was difficult for me to learn.  Anything you've learned so well that it's now not even raised to a conscious level is, I suspect, like that.

Might it be related to one's spatial reasoning ability?  That's an area where the tests I've taken indicate I have a high ability, and it's also (feminists, avert your eyes) one where women score, on average, considerably below men.  Some men, obviously, score low as well.  I wonder how well this ability correlates with the ease of internalizing thread direction?  Or the sense of “proper” twist-em direction?  :)
Posted by Unknown at (permalink) 4:00 AM