Nothing bad happened, but there was sure a lot of stuff that did!

Debbie and I both got colds on Sunday, but I recovered within 24 hours and she's still miserable.  The poor girl is on the tail end of the current cold, where her pattern is to cough and cough and cough.  Ugh...

Monday we made a surprise trip down to SLC, for Debbie to get an injection.  This was for another drug (Prolia) to help with her osteoporosis.   A new drug means a new battle with the insurance company – they don't want to cover it, and her doctor insists that its the only one that will help her.  Her doctor says the insurance company's recommendation (which, of course, is much less expensive) is completely inappropriate for her.  So we're paying out of pocket, and the doctor is going to battle for us.  This tension between our healthcare provider and our insurer is becoming a pattern, and I'm afraid it may be the new norm.  We're not too happy about that, especially when we're paying an absurd amount for our health insurance premium, relative to the benefits being received.

I took my Tesla Model X down the service facility on Tuesday, as planned.  The problem with the spoiler they replicated immediately.  The first thing they tried was to “recalibrate” the spoiler.  After some discussion with the techs, I confirmed that what that meant was to recalibrate the position sensor for the spoiler.  Once they finished with that, the spoiler worked great!  But once I got the car home on Tuesday night, it again didn't work.  Tesla is still working on an answer for me on that.  The mirror problem that I thought I had turns out to just be my el stupido: The mirror wasn't dark, it was the rear window that I look through.  It is, in fact, tinted very dark – so even when the mirror is not darkened, it looks like it is.  Well, to me, anyway.  The techs there told me that nobody had ever complained about that before.  Oh, well. 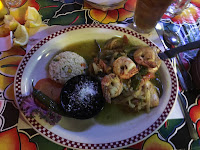 That evening I met up with an old friend, Doug W., and his wife Dee.  We had dinner at the Red Iguana.  My entree is in the photo at right: a grilled chicken breast smothered in tomatillo sauce, with roasted (and seeded) jalapenos and some grilled shrimp.  Lovely, it was (both the company and the food)!

Yesterday Debbie had a hair appointment, which in her priority scheme ranks just behind life-saving emergency medical treatment.  Ordinarily she would drive herself down to Ogden (where her stylist has her offices), but because of her cold she's been getting very little sleep.  I didn't want to let her drive in that condition, so I drover her down and waited while she got her hair done.  That took five hours out of my day, so I got little else done.  But we did both get back here safely. :)  Also, we had a fine meal at Maddox, where I learned something interesting while reading a poster about their founder: he lived in Paradise until his early 20s!  I had no idea...

Today I'm concentrating on getting ready for our upcoming trip to Hawai'i.  We leave on Monday, bright and early, and we return on the 28th.  We're staying at our favorite bed and breakfast in the islands: the Hale Ohia Cottages, just outside of Volcano Village.  We've been there about eight or nine times over the past 25 years or so, but it's been about 12 years since our last visit.  We can hardly wait to be there again!  We'll be in Cottage 44; if you happen to be in the area, stop in and say hi!  They have WiFi there, and we'll have our laptop, so you can expect some posts and photos from there...
Posted by Unknown at (permalink) 6:30 AM