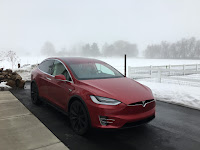 Model X update...  I took the photo at right just a couple minutes ago.  We've got fog here, the temperature is in the low 40s, it's raining intermittently, and the snow on the ground is melting at a prodigious rate.  We're forecast to get about an inch more rain between now and Saturday night; the snow may be completely gone by then.  That will be an amazing transformation!

I forgot to mention in my earlier post that we actually did have a chance to try out the auto-steer feature.  On one of our trips back from SLC, we were on I-15 in rush hour traffic.  For about three miles we were going slower than 45 MPH – so I engaged the auto-steer to see what would happen.  Bottom line: it worked just fine.  It wasn't very exciting; we were simply lane-keeping and the adaptive cruise control kept us at a safe distance behind the car in front of us.

One thing we've noticed (whether or not auto-steer is engaged) is that where there's a traffic sign that arches across the entire freeway the adaptive cruise control seems to be fooled.  Most of the time we just feel a brief deceleration as we approach the sign, then it picks up speed again right afterwards.  Sometimes, however, the car seems to think that a collision is imminent – the crash alarm starts sounding and the brakes are slammed on.  This always happens when it's far too late to actually stop before the sign, so what happens is we slow down abruptly, sometimes by 30 or 40 MPH, and then we pass the sign.  Once past the sign, the alarm goes off and we speed back up.  The first few times that happened it was quite disconcerting, as I had no idea what was causing it.  After a while I put the pattern of the signs together, so now I'm on the lookout for it.

I've also learned a bit more about how the adaptive cruise control works.  It uses forward-looking sensors to “see” the cars in front of us.  I know the car has radar, cameras, and ultrasonic sensors looking forward.  I know (from reading) that the radar is involved with the adaptive cruise control; I'm not sure about the cameras or ultrasonic sensors.  Anyway, what I've discovered is that the car the system is “looking” at is always the car directly in front of my car.  That's not always ideal.  Consider the case where there are two lanes of traffic going in each direction, and the road is turning to the left.  If I'm in the left lane, a car that's ahead of me in the right lane might be directly in front of my car.  In that case, if the other car is going more slowly than I am, the adaptive cruise control will slow me down – even though my lane is completely clear ahead of me.  That tells me that the adaptive cruise control has no sense of the layout of the road, despite having an excellent map available to it, and a vision system that is clearly tracking where my lane is (I know this because it shows the results on my dashboard!).  The left hand of their driving automation doesn't appear to know what the right hand is doing. :)  Hopefully they'll fix this one of these fine days...
Posted by Unknown at (permalink) 11:53 AM