Paradise ponders, shifty grout and hoarfrost edition...  But first, for your amusement, the video at right (try to ignore the fact that it comes from the New York Times).  The subject is very simple: it just shows people standing on a 10 meter (about 33 feet) tall diving tower as they try to work up the courage to dive off.  I couldn't stop watching it!

A few days ago I wrote about my grout project.  It's finished now, and we can use our shower again.  But there's something mighty peculiar about the caulking we're using: it changes color, and quite dramatically.  When it's dry, it's roughly the color of milk chocolate – a rich, dark brown that doesn't match our other grout at all.  When it's been wet for 30 seconds or so, though, something quite dramatic happens: over the course of about 10 seconds it changes to a very pale beige, almost precisely matching our old grout!  So ... while we're taking a shower, the new grout looks great.  After the shower dries out, it looks like someone spilled dark paint onto the patched areas of our grout.  Sigh...

Michelle H. is one of the friends we've made here.  She's also the lady who comes over to clean our house, and she's done many other things to help us when we're on trips or (especially!) while Debbie was injured.  She lives in Paradise, and is an altogether typical resident here: a devout Mormon, mother of eight children, friendly, full of smiles and good cheer, and (very) active in the community.  A few days ago we took her out for lunch at Los Primos (which she loves!), and on the way back home we were admiring the hoarfrost on the trees.  We'd had a freezing fog in the morning, and even the weeds were beautiful.  Michelle called it something else (“frosty fog” or something like that), and I told her that it was actually called hoarfrost.  I wish I had a photo of her face when I said that.  It was obvious from her reaction that she thought I said “whore-frost”, and most Americans would pronounce the two as though they were precise homonyms (there's actually a subtle difference).  It took a little while for us to convince her that we weren't having some fun at her expense! :) 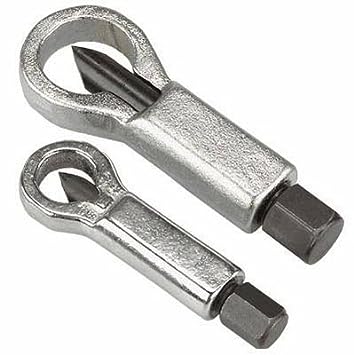 A few days later, she was in our house while I was unpacking a tool I'd received in the mail.  She asked me what it was, and I replied (with the truth): it's a nut-cracker.  Once again, that face! :)  The tool I bought looks exactly like those at right.  Michelle only recovered her equanimity after I explained what the tool was actually for – splitting nuts that had become corroded onto a bolt.  Oh, poor sheltered Michelle, exposed to a couple of outsiders like us!

Our forecast has five days of snow in the next seven days, but none of the probabilities are high, nor are the forecast amounts large.  Better yet: for four days starting tomorrow, we're supposed to have temperatures well above freezing for most of the day – and on two of those days, we have rain in the forecast.  Oh, that would be lovely to have enough rain to melt down a substantial part of the snow mountains we have all over our place!

Yesterday while we were out gallivanting amongst the wildlife, someone came by our driveway and moved two of the largest snow piles I'd made so that we had better visibility when trying to leave our driveway.  We spotted that as we pulled back into our driveway.  Even around here, surrounded by the nicest people on the planet, that's still a very nice thing for someone to do.  I couldn't tell who did it; all I could figure out (from the tracks) is that whoever did it had a very large piece of equipment indeed – those tire tracks were about 30" wide!  A little later in the day I was taking our trash can out to the highway, and I saw the person who was doing the nice driveway-fixing – he was working on my neighbor's driveway across the highway.  I went over to find out who it was and to thank him, and discovered that it was a county employee!  He was actually assigned to do this work, as a way of reducing accidents by enabling people to see as they pull out of their driveway.  He was working his way along the entire length of State Highway 165, clearing everybody's driveway.  What an eminently sensible thing to do!  I've lived in California so long that I basically never expect the local governments to do anything sensible, so seeing it happen here is still always surprising...
Posted by Unknown at (permalink) 7:49 AM