Another most excellent day!

Another most excellent day!  We spent the entire day in the Kapapala and Ka'u Forest Preserves, mostly between 3,000' and 5,000' altitude.  The highlights of the day were the beautiful koa, ohia, and mixed native forests we traveled though, and the many different birds we saw while doing so.  Today's birds, from memory:
Most of today's travel was on four-wheel drive roads, sometimes fairly challenging.  You can see our track today here.  I had the truck in the low four-wheel drive range nearly all day.  Some photos along the way: 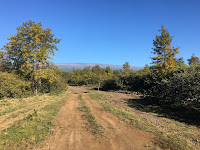 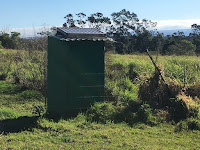 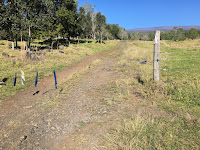 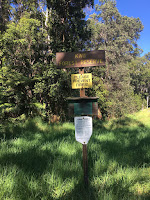 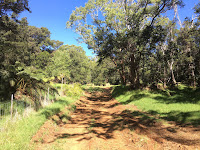 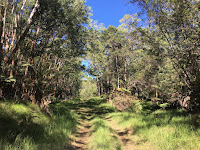 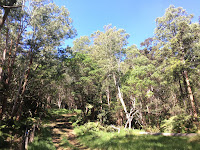 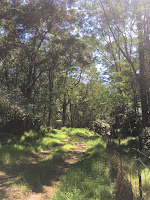 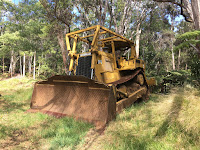 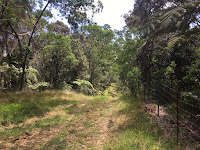 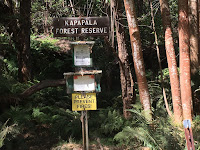 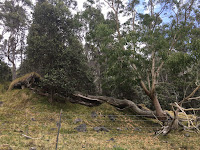 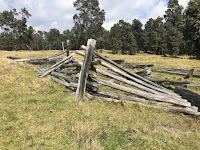 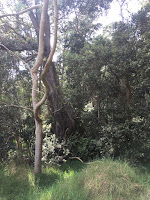 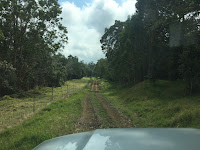 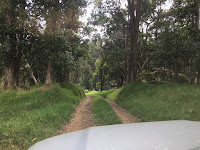 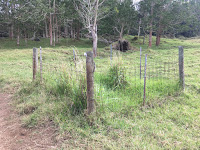 The second photo shows a little building that we ran into while traversing Kapapala Ranch on the way to the forest preserve.  I had to study it for a bit to figure it out: it's a solar-powered fence electrifying system.  The third photo shows a nearby gate that it electrifies (along with a lot of fencing).  I was very careful opening that thing – didn't want to get knocked on my butt!  The bulldozer photo shows a Caterpillar D8N – a large bulldozer built in the late '80s or early '90s – that was parked at the highest point we reached on our trip.  That's a valuable (even if old) piece of machinery that's way out of the way!  The last photo shows a small fenced area, perhaps 12' on a side  We saw several of these during our trip today, and we have no idea what purpose they serve.  My first thought was that they were protecting some delicate plant, but no such plant was in evidence in any of them.

In the evening we went out to dinner with our host at Hale Ohia, Michael Tuttle.  We've known Michael now for nearly thirty years, and we started coming to Hale Ohia shortly after he opened it.  This dinner was our thank you to him for being so accommodating to us for our scheduling needs (we had to cancel one trip at the last minute when Debbie was injured), and for being so nice to us over the years.  We went to Ohelo Cafe in Volcano Village, and had an excellent meal.  Debbie and I both had their fish special: grilled ono with a coconut-and-balsamic reduction sauce on jasmine rice, with Brussels sprouts and caramelized onions.  Fantastic!  Then for dessert we had creme brulee – very good, but not quite as good as our gold standard from the Gastrognome in Idyllwild. 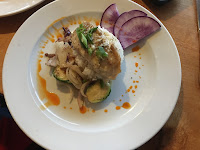 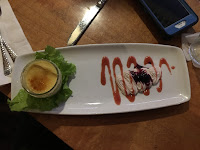 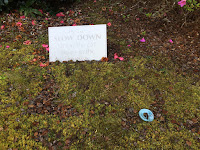 On all of our visits to Hale Ohia before this one, we had the company of Dixon the cat, a permanent resident. Dixon was a handsome ginger cat and a real feline character, and of course he glommed onto Debbie like glue.  He spent quite a bit of time on Debbie's lap on each of our visits, and he'd jump in and out of our open cottage windows whenever he felt like visiting.  Dixon died a few years ago, aged 19, of complications of old age.  Michael buried him in a beautiful location on the property, facing the yard that Dixon loved so much, and marked the site with a sign that used to greet us in the driveway when we pulled in.  That sign reads: “Please SLOW DOWN.  Dixon the cat sleeps in the driveway.”  The sign is quite faded now.  There's also a tiny food bowl with a curled up cat on its rim.  Dixon was a much-loved cat, not only by Michael, but by the staff at Hale Ohia and by most of the guests that Dixon greeted...
Posted by Unknown at (permalink) 10:28 PM