A day of contrasts...

A day of contrasts...  Our plan for today was to do some birding on the Pu'u O'o trail (off the Saddle Road).  We left our cottage around 7 am and headed there through rain, heavy mist, and 100% overcast for nearly the entire way.  Just as we got to the trail head, it turned into a light fog – decent, but not perfect hiking conditions.  The first thing I did was to check out the trail to make sure it was safe for Debbie to attempt.  Unfortunately it was not – while it's in pretty good shape, it's full of unstable cindery areas that are exactly what someone recovering from a broken knee does not need.  I left poor Debbie in the car while I went on an extended reconnoiter, thinking of a visit some other year.  Conclusion: we must make it back here!  The trail heads into a kipuka just 100' or so from the trailhead, and in there I saw and heard lots of birds.  The second kipuka, a half mile or so in, we're told, is even better birding.  I took a few photos along the way: 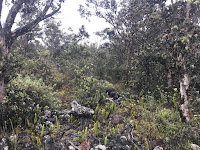 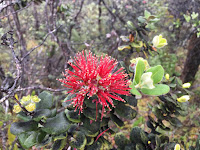 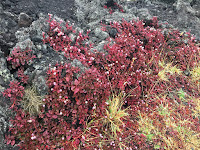 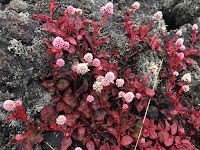 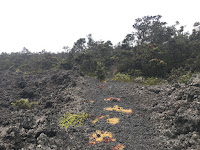 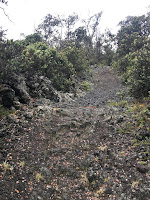 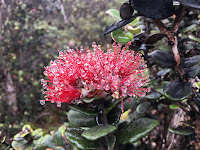 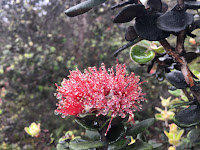 I knew this might happen, so I had a fallback plan: to drive around the west side of Mauna Kea to Waimea, then from there up the Kohala ridge to Hawi.  From there we could drive west a few miles to a state historical park with a reconstructed native Hawai'ian village, and east to the lookout over the Pololu Valley.  Both of these are favorite destinations from previous trips.  Well, the Kohala ridge was quite dry, and while still beautiful (see panoramas below) not nearly as beautiful as on previous visits.  The historical park looked fine, but the wind was blowing steadily at about 40 mph, far too strong for comfortable walking.  We did find a couple of nice back roads to explore (non-panoramas below).  And Pololu ... has apparently been discovered.  Instead of a car or two parked there for the hardcore hikers, there were about 100 cars parked there for a quarter mile or so along the road.  We just turned around and left.  That was all very disappointing. 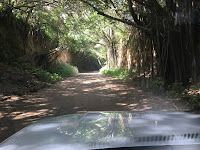 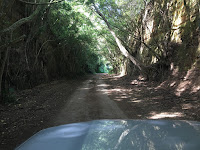 So we headed back to Waimea to get something to eat, at the Big Island Brewhaus.  It had great reviews on Yelp, both for the food and for the beer (Debbie was very interested in that!).  We ended up ordering the same thing: a burrito stuffed with grilled ahi, rice, beans, avocados, tomatoes, onions, sour cream, and who knows what else.  Great stuff!  We also had a bowl of their “luau soup”, which had a clear chicken broth with pieces of chicken, plus rice and lots of spinach.  Also very good.

Then we decided to go check out a couple of other locations that we remember fondly: the Waipio Valley overlook (which we fully expected to be crowded) and Kalopa State Park.  On looking at the map for a fun way to get from Waimea to Waipio, I noticed a little road we'd never been on before, called Mud Lane.  I found it with Google Maps help, and down it we went.  The road was marked “Dead End”, so we were prepared to have it stop at any point – but it was so beautiful when we started on it that we determined to take it as far as we could.  Well, the first couple miles or so was a nice one-lane paved road.  That turned into a nice dirt road.  Then a rough dirt road.  Then a rougher dirt road.  Then a serious four-wheeling road with small boulders, deep ruts, washouts, trees across the road, and so on.  I spent about an hour working hard to avoid hurting the truck while also making sure we didn't go somewhere we couldn't get out of.  After about six miles we ran into an old cane haul road (where big trucks took loads of sugar cane out of the fields).  The sugar cane is long gone, but the roads remained.  We took that old cane road down.  It started out as an awful paved road, with brush growing in from the sides and big holes.  In one part of it, about a third of the pavement had fallen over a 40' high bluff, leaving just barely enough room for us to squeeze through.  That road slowly got better and better, until eventually we hit the road for Waipio.  Phew! 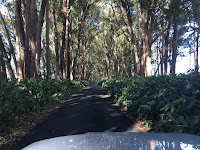 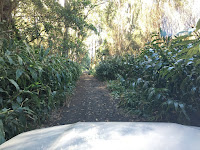 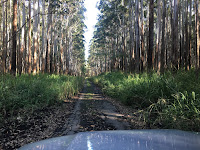 Waipio has changed a lot since our last visit.  There's a tourist trap at the end, with lots of shops for food, gee gaws, etc.  There was a big crowd at the overlook.  We just skedaddled.  Then we drove up to Kalopa State Park, where in past years we camped in the cabins there, including once with Debbie's mom and once with my parents.  Kalopa was a very pleasant surprise.  It looks even better than we remember it, and expanded.  It's obvious some money has been spent on upkeep and improvement.  The flora was lush and verdant, and we heard lots of birds.  Very nice to see that after so many of the negative (at least from our perspective) changes we've seen elsewhere...

Tomorrow we head to the Kapapala Forest Reserve.  We got the combination to the lock on the gate tonight...
Posted by Unknown at (permalink) 12:14 AM