A strange day in Hawai'i...

A strange day in Hawai'i...  Well, after a meal of delicious “local style” Ahi poke, we drove up to Volcanoes National Park as planned, but things went a little differently than expected.  On the plus side, I paid $10 to get a lifetime pass that gives Debbie and I (and anyone else we can stuff in our car) free entrance to any federal facility (meaning National Parks, National Forest, etc.).  I qualified for that by being over 62 years old and being a U.S. citizen. That was good!

On the other hand, when we entered the park with our new pass, we found the entrances to the visitor center and art center blocked by police cars and policemen wearing gas masks.  Seriously!  Kilauea Crater is venting lots of fumes, and the trade winds are blowing them to the southwest – right where the visitor center and art center are.  They're closed until the fumes go away, which might be never.  Worse, the park was just overrunning with tourists.  We saw ten or so gigantic tour buses, many more smaller tour vehicles, and hundreds of cars.  Most of these people were making the most superficial tour of those features the National Park Service deigned to mark.  Most of them looked bored and unhappy.  Any wildlife that might have been there would have retreated to positions a few miles away.  We skedaddled – this was not our kind of scene!

So we decided to try driving up the Mauna Loa road, which takes you to about 9000' on the east flank of the volcano.  That road we've been on many times in the past; it winds through the most beautiful koa forests I know of, through several kipukas, and through some spectacular old lava flows.  We saw some interesting things along the way.  Mamane were in bloom all over the place (the yellow flowers in the photos below) between about 7,000' and 9,000' altitude – more than I've ever seen before, so we must have timed our visit perfectly.  We saw about ten Erkle's Francolins and a half dozen Kalij pheasants, both introduced (non-native) game birds.  These birds were almost fearless – they'd let us to within a few feet of them before sidling away.  I was even able to get some iPhone photos of them.

The next-to-last photo is a Mauna Kea silversword, a rare and endangered species planted by biologists near the summit of Mauna Loa road.  A short trail from the parking lot leads to a place where some silversword plants are living in a roped off area just a few feet from the trail.  This is new since our last trip here, and I don't know what the backstory is – but I'm guessing that it's related to success in cultivation.

The last photo is a koa seedling, a baby koa if you will.  This seedling has both the juvenile leaves (the tiny ones growing in two rows) and some adult “leaves” (though they're not really leaves at all, as the linked article explains).  The first time I saw these half-and-half plants I was really puzzled, but on a trip here with my dad I got the explanation from him.  Apparently this is quite a common occurrence amongst members of the pea family, which the koa is. 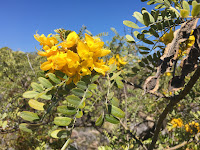 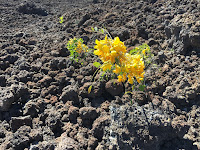 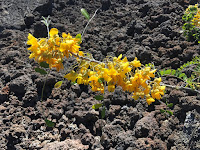 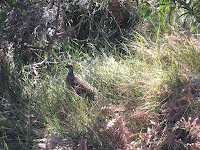 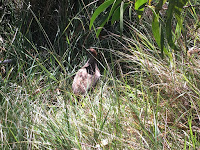 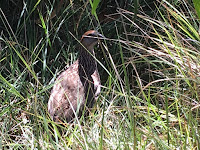 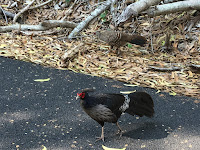 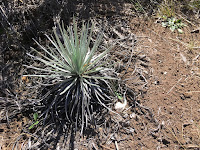 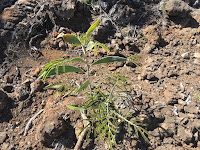 After getting back down from the Mauna Loa road, Debbie pointed out that restaurants were likely to be crowded tonight (Valentine's Day), and besides she was tired and really just wanted some more of that delicious poke.  I'd be a poor excuse for a husband if I wouldn't indulge her in some more poke for Valentine's Day, wouldn't I?  So off we went, back down to the KTA in Hilo to buy some more poke.  It was a close call, though: the woman in front of us in the poke line bought nearly all the remaining of the “local style” ahi poke (which is the one Debbie wanted).  Luckily there was just barely a pound left when she got done, and we left with our poke and a nice bottle of champagne.  We'll be eating and drinking that soon!
Posted by Unknown at (permalink) 8:00 PM