Well, that was much better!

Well, that was much better!  At the suggestion of reader Richard C., I bought myself some “breakout boards” to make it easier to work with the tiny little surface-mount integrated circuits so common today.  Many parts can still be purchased in (the much easier to prototype with) DIP packages, but some, like this one, cannot.  Most of the breakout boards I found were obnoxiously expensive, between $5 and $30.  When I'm using such a thing to mount a fifty cent part, I rebel.  But eventually I found this very handy breakout board package at Digi-Key.  It's from Texas Instruments, and it has six each of six different breakout boards – 36 in all – for $10.08.  That's just 28 cents each!

Yesterday my breakout boards arrived, and I put them to the test.  First I soldered the (tiny!) chip's six pins to the breakout board.  Once I got the first pin soldered the chip was held in place; then the rest of the pins were easy.  I'm going to try gluing the chip down next time, before soldering.  Then I soldered some double-male header pins in place, making this look like a six-pin DIP, form-factor-wise.  The perf board you see in the last two photos is only there to hold the header strips in place while I soldered them.  The end result?  A surface-mount chip now can be treated just like a DIP.  I can either solder the header pins directly (which is easy with their 0.1" spacing), or I can plug the whole assembly straight into a DIP socket.  Either way, that's way easier than wiring straight to that teensy little chip!

Several things other than the breakout board contributed to making this possible, and even not too difficult.  The circuit board vise (entirely visible in the last photo) is inexpensive and indispensable.  I have an excellent soldering iron (Hakko FX-888D) with a very pointy tip (just 0.05" diameter at the end).  Finally, I have a pair of Carson CP-60 head-mounted magnifiers.  These act like a low-power stereo microscope that I can use with my glasses on (so my astigmatism, which is quite awful, is corrected) – and they're automatically pointed wherever I'm looking. If you're wondering how I managed to take these photos with my iPhone, that's simple: I took them through a magnifying glass (except for the last one; that's straight up iPhone).  That's why you see the pincushion distortion in the third photo... 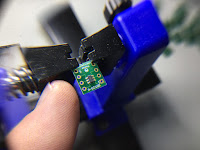 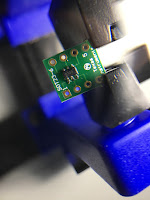 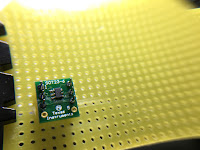 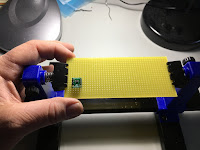 Posted by Unknown at (permalink) 8:01 AM