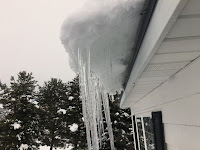 Paradise ponders, the overhang of doom edition...  Yesterday afternoon I ventured up onto the roof of our deck, to shovel off the massive piles of snow that had fallen on it from the second floor roof.  Most of the second floor roof was completely clear of any snow, as it had all fallen off – but there was one section about six feet wide that was still loaded up, almost all the way to the peak.  The photo at right shows what this looked like from the deck roof.  For scale, the soffits there are 18" wide.  Some of those icicles are over 3' (a meter) long.  The reason the snow shelf can stick out so far is that there's over an inch of solid ice on the bottom of it.  Yikes!  While shoveling 18" or so of snow off the deck roof, I carefully avoided getting directly under that shelf.  About an hour after I finished, it came down with an enormous “whomp!” that shook the entire house (and knocked some snow off other parts of the roof in the process).

This is now the third time I've shoveled off the deck roof this winter.  In between these clearings, the resulting snow piles around the deck have never fully melted.  As a consequence, the piles are now 5' to 6' high, and nearly solid ice at the bottom where they have been compacted.  The dogs, when taking off for a run in the yard, have to jump up to get to the snow piles, and then down into the yard. 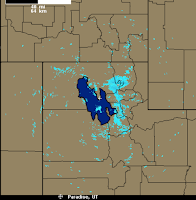 And speaking of snow...  Last night we got another 4" of powdery snow.  It's powdery because it's cold, and getting colder all day today.  The 10 day forecast doesn't have us getting above freezing for eight days and nights.  At left you see the weather radar for northern Utah as of about a half hour ago.  The light blue areas are where it's snowing.  Basically it's snowing in the Wasatch mountains (a good thing!) and on Paradise.  Seriously – that little plus sign with a circle around it is where Paradise is, and that's basically the only place outside the mountains where it's snowing.  Sheesh!

So this morning I will be out plowing and blowing and shoveling again.  After that, though, I should have a snow removal respite for at least a week.  Looking forward to that, I am...

And today is soup day!  Los Primos has beef soup today, and Debbie and I are planning our lunch there...
Posted by Unknown at (permalink) 6:17 AM