Paradise ponders, multitude of mooses edition...  Well, Debbie and I are finally having that less-than-harried day.  It feels really good!

Yesterday I did manage to finish (re)installing all our Nest Protect alarms.  I thought there were twelve, but I was wrong – there are actually thirteen of the darned things.  I mentioned yesterday the annoying problem in their user interface, wherein the number of names the things can say (verbally) is limited and doesn't match the rooms we actually have alarms in.  Well, it turns out that the list of “sayable” names is exactly thirteen long!  That means that we have to use every single one of them if we want a different verbal cue for each alarm (and I do!).  So we have several that are ... much less than intuitive.  For instance, our mechanical room is verbally our “den” (because we don't have an actual den).  That's something I'd really like to see Nest change, though I suspect limitations on CPU power or flash storage are the source of the issue, and fixing it might require new hardware.  It wouldn't be such a limit in a smaller home, but for us, with our big house full of small rooms, it's very much a real limiting factor...

A couple days ago we picked up a nice-looking chunk of sea bass from our grocery store, and yesterday afternoon Debbie cooked it for our dinner.  She found a recipe that had her simply bake the fish, but then slather it in a sauce made with olive oil, capers, and lemon.  She put it all over rice, and it was superb!

Just after we finished that wonderful meal, our friend Michelle H. came over with her daughter Lizzie and her husband McKord.  They brought some lumber over to build a short set of stairs, and they needed the tools I have in my shop.  I spent the next few hours working with them (mainly with McKord; the girls went into the house to talk with Debbie) to make a “stairs kit”.  McKord knows all the types of tools we used (woodworking bench and vise, table saw, band saw, chop saw, and router), but naturally he didn't know my specific makes and models.  So my role was basically to show him how to work the particulars on the tools, and he did all the actual fabrication work.  It was quite enjoyable for me, and McKord was having a ball with the tools.  For instance, my chop saw paints a laser line just to the left of the kerf, and he really liked that.  Another thing he really liked was the woodworking vise – he'd never seen one before, and he loved how easy that made it to use the router (we used that to put a bullnose on the stair steps).  When we were all done, they piled all the cut-up wood into their car and took off back for Michelle's house, where presumably they assembled the stairs down into her newly-finished garage (now a play room).

This morning we took a leisurely drive up Blacksmith Fork Canyon, the mouth of which is just four miles from our house.  We were hoping to see some wildlife and some pretty scenery, and boy howdy did we.  Last night we had a freezing fog, and as a result the trees and weeds and everything else (even the elk!) was frosted, and in the early morning light it was just gorgeous.  We didn't see any deer at all on the trip into Hardware Ranch, but we did spot four moose – a mom and a yearling, and then another mom with a much smaller yearling.  Both of them were quite close to the road, and we remembered to bring our binoculars, so we could (literally!) count the hairs on their tails and in their beards.  One thing we saw that we'd never noticed before: the tips of their tails (all four of them) was white.  Somehow I'd never noticed that before.  The second photo below shows the mom-and-yearling pair with the smaller yearling.  On the way back out of the canyon, Debbie spotted a beautiful buck with three does; the third and fourth photos show them.  The rest of the photos are some of the scenery we saw. 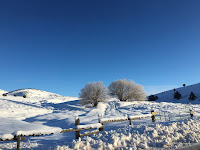 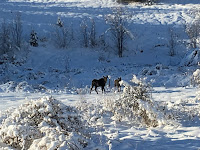 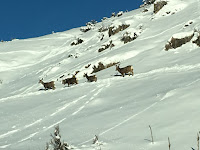 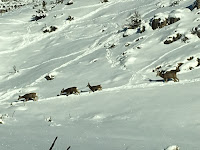 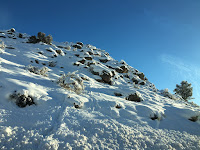 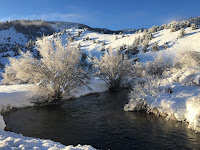 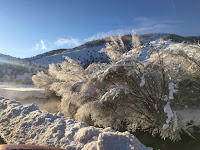 Debbie had a brilliant idea as we were driving home, to wit: to drive up to Herm's Inn and get one of their cinnamon rolls to go – then go home and have it along with a nice cup of tea (for me) and decaf coffee (for her).  We did exactly that.  Herm's cinnamon rolls are (a) gigantic (about 7" in diameter), and (b) absurdly delicious.  They are made doughy, buttery, and chock full of cinnamon – and they come with a cream cheese based frosting that you can slather over the top.  One of them is more than enough for both of us even when we're hungry.  With some of the excellent beverages we have at home they were even better than at the restaurant.  Yum!
Posted by Unknown at (permalink) 11:52 AM