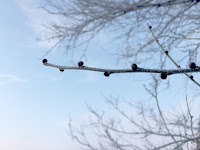 Paradise ponders, frozen air edition...  This morning when I let the dogs out for their morning run the temperature was -4°F (that's -20°C for my European readers).  Cold!  I was out before daylight to haul firewood into my office in the barn and into our house.  My breath froze in my mustache and beard, and I noticed that through the house lights I could see ice crystals in the air.  After the sun rose I could see that the air is full of gently falling ice crystals, which in the perfectly still air are coming gently to rest on whatever surface they happen to fall onto.  The photo on the right shows some of these crystals resting on an ornamental plum twig.  The relative humidity is high (about 90%), so I'm assuming that the ice crystals are being formed from the water vapor in the air around me.  The sky is clear, so it can't be precipitation.

My office was so cold this morning that my document scanner refused to work.  The scanner software actually reported that the temperature was too low!  I discovered through some googling that the problem is the paper-handling rollers: they won't operate properly when the temperature is so low that they get stiff.  That's a first for me!

My friend Mike B. and I were texting about the amazing low prices of disk drives today (including SSDs, which really aren't “disk” drives at all!).  One of his texts:


It's amazing...  My Mom was born in 1903 and got to see aviation got from gliders to the moon landing.  You and I saw the technology go from simple flip flop circuits to being able to go to the "store" and buy 6TB drives for next to no money.  We can say we were there from the start !!  Boggles my mind....

This is a phenomenon I ponder quite often, especially after reading some twit proclaiming that mankind has stopped inventing revolutionary technology.  My start in electronics was using vacuum tubes, something that electrical engineers in school now don't learn about at all, and may well not have even heard of – and yet, they were state-of-the-art (especially for radio) when I got my start in electronics in the '60s.  The first computers I worked with (early '70s) used discrete components including germanium transistors (then the speed kings) and magnetic core memory.  Even though I lived through all these electronic advances as a part of them, I still have trouble wrapping my brain around the sheer scale of the advances.  Mind-boggling indeed...

I'm in my office now, listening to a performance of Mozart's opera Don Giovanni, by Teodor Currentzis.  This version is notable for the use of period instruments in the orchestra, and for the energy of the performers.  I bought it after reading about it here.  I'm enjoying it, which is unusual for me – opera is not usually something I find tasty.  I find myself wishing I spoke Italian like my friend Doug W.; as I don't, I have to think of the voices as musical instruments, rather than as carrying a dialog...

Ah, my fire is starting to warm my office!  Perhaps I'll be able to run my scanner soon...
Posted by Unknown at (permalink) 8:11 AM