Paradise ponders, thirteen bags of chili edition...  Yesterday afternoon Debbie made a gigantic cauldron of chili.  We gorged ourselves on it, and then set it on the counter to cool down.  That took until late this morning, at which point we started bagging it.  We used our vacuum sealer, with 10 x 13 inch bags, to do this – and it took 13 generously-filled bags to take care of it all.  We're still getting used to the idea of having this vacuum sealer around, but this chili experience is really driving that home.  Formerly we'd have poured the chili into plastic containers that were really too big for a single serving, and stacked them in the freezer.  Now we've got thirteen future meals, packaged with just the right size, all ready to go.  It took amazingly little effort to do this, too – just a teensy bit more than simply pouring it into containers.

One thing that was very interesting to us: we bagged the chili while it was still a bit above room temperature.  It felt just barely warm to the touch, but that was enough that it came to a vigorous boil as the vacuum sealer sucked the air out of the sealing chamber.  It has a clear lid, so we were able to watch this.  It's very weird to watch chili that you know is about 100°F coming to a violent boil!  We overfilled one bag, and that one spewed a small amount of chili past the sealing line – but it didn't seem to affect the result at all.

This morning we (finally) decorated our Christmas tree (front and back view below).  There sure are a lot of memories in those ornaments – many of them were gifts from my parents, Debbie's mom, or friends.  Others made us think of friends, some no longer with us.  Some of them brought smiles as we remembered where and when we'd gotten them.  Especially moving, for me, were the ornaments that made me think of friends or relatives I haven't seen in a long time.  For instance, the little hand-made angel on the top of the tree was made by Sylvia E., a colleague for eleven years when I worked at Stac (which became Previo), starting in 1990.  She was an executive secretary that entire time, a friend for much of the time, and eventually my executive secretary (really, much more of an assistant than secretary) when I became CEO.  It's been three or four years since I last talked with her, but this morning I fired off an email to her old address, and hope to hear from her... 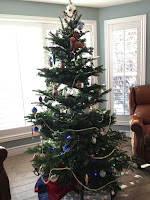 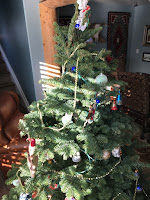 Over the past couple of days I did a little electronic design work – that's ridiculously satisfying for me, for reasons I can't entirely explain.  In this case, I'm going to solve a silly little problem in, I hope, an elegant and highly usable way.  The problem is that the cabinetry we're going to install in our mud room will cover the light switch near the front (exterior) door.  This is the switch we'd use upon entering the house through the front door, to turn on the lights so we can actually see in the mud room.  A useful thing, that is! :)  On the other hand, the cabinet is also highly useful – the particular cabinet right by the present light switch will be holding a snow shovel and salt bin.  How can we have both a light switch and a cabinet?

I came up with the idea of letting the cabinet pull (which will be metal) closest to the open door be the light switch, too.  It's an easy bit of electronics these days to make the cabinet pull touch-sensitive (by sensing the body's capacitance).  We don't want to turn the lights on and off every time the cabinet is opened, though.  So I came up with the idea that the switch should toggle only if (a) it is touched for less than a second, and (b) the door is closed the entire time it is touched.  That way, if you're opening or closing the cabinet door, the lights won't toggle – but if you just tap the cabinet pull, they will.  This little circuit could be built with a PIC or similar microcomputer (and probably would be, if it were to be mass-produced).  But that would require programming, and that would be more work than simply building it in hardware.  The design I came up with requires six integrated circuits, three of which (touch sensor, Hall effect sensor, and relay driver) would be needed even with a microcomputer).  The other three: a 555 timer (I'm amazed they're still being made!), a collection of six gates on a single chip, and a dual D flip-flop.  These parts, plus a power supply and a SPDT relay (to emulate a three-way light switch) are all that it requires.  I ordered the parts today; it will make a fun little project to put that together and troubleshoot it (because you know it ain't all gonna work on the first try!).  Once I get it all working I'll publish the schematic just in case some other lunatic wants a crack at it.
Posted by Unknown at (permalink) 2:27 PM