Paradise ponders, old friends edition...  Well, my wish came true!  Sylvia E. wrote back last night, and now we've started an email conversation.  She's well, about to retire, and full of news.  What fun to reconnect with her! 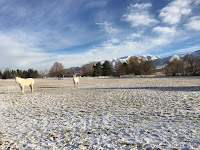 It's 14°F here today, and my neighbor's horses don't seem even slightly fazed by that, as you can see in the photo at right that I took just a few minutes ago.  They're in the little field just north of our house, pawing through the snow and ice to get at the alfalfa below (there was about 6" of alfalfa when the first hard frost hit).

Yesterday afternoon I helped Debbie make a batch of cookies.  These were a favorite recipe, Amish cookies heavy on the butter, molasses, and cinnamon.  The main challenge was the sheer quantity of cookie dough needed, because she was making a batch of about 100 cookies.  The dough, when all was added, completely filled a six quart mixing bowl.  It was stiff, too, once the flour was added, so even our KitchenAid bulldozer of a mixer showed some signs of the strain.  The biggest challenge, though, was simply keeping the bowl and mixer from spinning on the counter-top.  Toward the end it was a two-person operation: Debbie stabilized the mixer, while I tried to keep the bowl from spinning.  We finally got it all ready, but by then it was dark...

...so we hid the cookie dough, jumped in our truck with Miki and Race (our two adult dogs) and took off to see Christmas lights.  We cruised all over Hyrum, Wellsville, Mendon, College Corners, and Nibley.  There were lots of beautiful displays to see, too.  There was also a new phenomenon that we didn't much like – quite a number of houses had some sort of projector set up that shined what looked like lasers (points) all over the front of their house, in many colors, and moving in disconcerting ways.

It was after 8pm by the time we got home, and I was ready to retire for the evening.  Debbie, though, stayed up until after midnight – baking all that cookie dough.  Now our microwave and one of our ovens are stacked high with delicious cookies under plastic wrap.  Some of them are for us, she tells me – but I'll wager not very many! :)
Posted by Unknown at (permalink) 8:49 AM