Paradise ponders...  Somehow yesterday slipped by without me posting.  I don't know how that even happened!

Last night I did something I don't recall ever doing before: I fell asleep with my iPad on my belly and the remnants of a glass of (good!) Scotch in the crook of my arm.  Debbie rescued both the iPad and the Scotch, and I slept solid for about eight hours – a very rare thing for me, and very nice!

Lots of things yesterday; it was chaos central around the house.  The tile guys showed up as promised, but quickly disabused me of any notion that they'd be finished on Saturday.  It will be Tuesday before they're done, but that's ok.  The two-man team is led by a Hispanic fellow named Adrian, who until three years ago lived in Escondido – not far from where we used to live.  He even knew Jamul, as he had tiled a couple of homes there.  Adrian was interesting to talk with about the recent election.  Bucking the liberal stereotype of Hispanics, he's an ardent Trump supporter and loathes Hillary with spittle-splattering intensity. 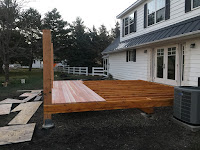 Our construction workers showed up around 3 pm and worked for a couple of hours, installing about a third of the redwood planking.  They're supposed to be back on Monday to finish that part, and hopefully to start on the deck's roof.  Our roofer/siding guys never showed up, dang it.  The fencing guys did show up, and they've got almost all the panels cut for our fence.  They'll be here again today to complete building the gates, cutting the final panels, and a few other little details.  On Monday they'll be back to actually attach the panels (the fasteners are arriving on Monday morning), and they'll likely finish the entire job by Tuesday night.  However, we won't be able to let the hounds loose, even with the fence finished – it's muddy, and the dogs would track mud onto the unfinished redwood (you know they would!).  So they won't be allowed to run and play in that yard until the painters put the finish on the redwood and it's had time to dry.  Poor doggies – they'll have to suffer through leashed walks with the papa...

I went through most of the day in a daze induced by sleep deprivation.  In the morning, though, I did manage to paint over the repaired drywall in our laundry room.  That came out great – you really can't tell that those repairs were done.  That's an important lesson for me: I will feel much freer, now, about chopping through drywall to run plumbing or wires.  It's not trivial to fix it up, but it's not the disaster I'd thought it would be, either...

Today my plan is to focus on trim, paint, and similar finishing details.  I have things like this around our new (and wonderful!) dishwasher, in the laundry room, and around the new doors in our bedroom (to the sun room) and kitchen (to the deck).

Oh, and I have an excellent customer service story, too.  We bought our new exterior door hardware from FPL.  This is the same hardware I bought two years ago for our barn, and I've been very happy with it.  One of the sets arrived with a broken metal part.  This was no fault of FPL: they had packaged it beautifully, padded and inside two nested boxes.  The shipper had somehow poked something through the boxes and plastic bags, long and skinny, like a long metal rod.  I took a photo of the damaged part and emailed it to FPL, and the next day they shipped out a replacement part for me.  It arrived on Thursday, and I installed that yesterday.  You can't ask for anything better than that!
Posted by Unknown at (permalink) 6:57 AM