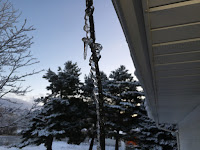 Paradise ponders, solid-phase H2O edition...  We woke up this morning to 24°F temperatures, with about an inch of snow on the ground.  It's beautiful outside, but a little sketchy for walking.  Last night we had mixed rain and snow, and now we have black ice on our driveway (and likely on the roads, too).  Pretty, though, like this giant icicle that formed on a dangling gutter heater cable (leftover from the demolition for our new deck)...

Yesterday Brad H., our painting contractor, finished putting the first coat of red paint on our new front door (the exterior door of the mud room.  It's going to be gorgeous!  Debbie seems really happy with the choices she worked out with Brad for which bits of the door will be red, and which white.  Tomorrow Brad expects to get the exterior of the mud room painted, which means our house will then appear to be complete from the outside as you drive in.  That will make Debbie very happy. :)

We left for Salt Lake City late in the morning yesterday, along with our friends Jimmy and Michelle.  The provocation for the trip was an appointment with Debbie's endocrinologist (more on that below).  After we finished with her appointment, we headed to Wild Birds Unlimited which is the closest source I could find for the bird seed I use in one of our feeders.  I discovered last year that these “no mess” seed mixes, with the right seeds, fruits, and nuts included, attract birds to the feeders that we otherwise wouldn't see.  It's also not as expensive as it looks, as it's 100% edible food (unlike, say, sunflower seeds which are about 25% edible) and it doesn't get eaten as quickly as regular bird seed.  For us, the “no mess” part is just an added benefit, not the main draw.  They had the seed in stock, but only a few bags.  The staff there fell all over themselves to help me out when they realized I was going to buy them out.  It was a shopping experience that reminded me of what we used to run into in San Diego all the time, a bit uncomfortable for me, and very different than in Cache Valley.  I can't imagine the staff in stores here ever being so deferential and obsequious, just friendly and curious. :)

Then we traveled north for 10 miles or so to eat.  If you've been reading this blog for a while, the photos below will tell you where we went: the Red Iguana.  Once again, it didn't disappoint – great food, cheerful and helpful servers, and old friends.  That's a very difficult combination to beat!  The first dish below was mine: a pair of luscious sour cream chicken enchiladas slathered in strawberry mole sauce (one of the specials).  Yum! 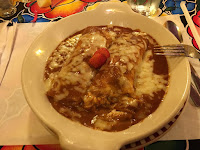 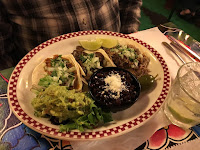 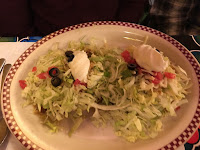 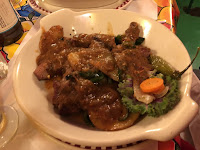 Our drive home from Red Iguana took nearly double the usual time, as it was either raining or snowing the entire trip.  As we climbed up out of Brigham City into Sardine Canyon, and then back down into Cache Valley, we had big, fluffy snowflakes dropping constantly.  The snowplows were working in the canyon.  The last few miles of the drive we had to go quite slow because the intense snowfall limited our visibility to just a couple hundred feet.  It was after dark, so the headlights reflecting off that falling snow really impeded visibility.  We drove by some houses in Hyrum that already had a beautiful display of Christmas lights up, and of course in the white snow they were really nice.

When we got home, Debbie and Michelle started baking pies for our dinner today.  We've got a yummy looking apple pie in the refrigerator, and a pecan pie in our microwave.  There's also a giant turkey (23 pounds!) defrosted on our kitchen island, and as I left the kitchen the girls were working on the stuffing.  That kitchen is going to smell good today!

My brother Scott will be here in a few hours, and Jimmy, he and I will stay out of the girls way while they make our dinner.  The three of us will be puttering away on the electrical wiring for our deck, in between sampling the goodies emerging from the kitchen.

On Debbie's endocrinologist's visit: some good news.  If you've been following her medical journey, you'll remember that the last thing she heard was that the drug that would help her the most (Forteo) was apparently causing her potassium levels to drop and her calcium levels to spike up.  Her endocrinologist told her to stop using it until we figured out what was going on.  That was extremely disappointing for Debbie, especially after the battle we went through to get her approved for that drug.  In the intervening month, the endocrinologist made a discovery: there is an interaction of sorts between Forteo and another drug Debbie is taking (the active form of vitamin D), and taking Forteo obviates the need for that other drug.  The interaction causes ... a spike in calcium levels.  That means that most likely all she has to do is stop taking that other drug and she should be fine on Forteo.  That is very good news for her, as it means faster and better bone regrowth.  So she's back on the Forteo, and in a month she'll recheck to make sure her calcium levels are in the normal range.  Her endocrinologist is not expecting any bad news on that recheck.  That's celebration time for Debbie!
Posted by Unknown at (permalink) 7:03 AM